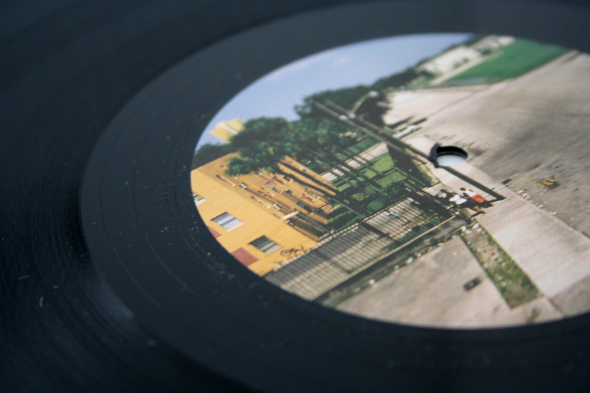 As is increasingly the case, the most exciting records this week were a clutch of grimy lo-fi records with feet on either side of the house and techno divide.

FunkinEven’s Apron label provided us with its first record from an outside artist, introducing the sounds of young Miami based producer Greg Beato to our ears with his Apron EP. “Respect The ’78” provided one of the year’s strangest longform techno jams, with woozy synths drifting in and out over knackered kicks, while “Let Em Know” provided a more recognisable house template, albeit shot through with scuzz. It was an aesthetic similar to False Memories, Marcos Cabral’s new album for L.I.E.S. which saw a collection of dusty productions made between 1998 and 2000 committed to wax. Those expecting material along the lines of his On The Prowl edits should probably look elsewhere. However, perhaps our favourite of the three was the return of Tuff Sherm on The Trilogy Tapes, whose Burglar Loops EP featured some distinctly hip hop infused house and techno.

Of course there was also plenty of less raw music to match the season, with Full Pupp providing the sunniest record of the week by a long way in the form of a collection of remixes of Prins Thomas’ “Bobletekno”, all lending a Sex Tags-style weirdness and dubbiness to proceedings, with DJ Fett Burger himself providing a suitably bouncy rework of “Flau Pappadans”. More forward thinking disco beats could be found in Mind Fair’s Golf Channel debut Downtown Nubian, with some wonderfully psychedelic music to match the abstract art, while extra Golf Channel goodness was present in the second part of Juju & Jordash’s Golem series, with “Coffin Train” providing some of the most demented analogue techno strangeness of the week.

Although the bass music continuum has been drifting towards ever tougher styles of late, this week’s offering was characterised by bright synths and bold melodies. Local Action supplied Scales, the debut album from US footwork prodigy Lil Jabba which showcased his idiosyncratic take on the genre. Offering an even more unexpected sound was Ikonika, whose Beach Mode single saw her style bubble over into breezy ’80s synthpop. It was a technicolour style shared by new Keysound signing E.m.m.a., who delivered a cheeky 7″ in the form of Jahovia, with vocals from Rebel MC that combined the brooding sounds of dub with something much lighter.

On a considerably more experimental tip was the latest release from Mark Fell’s Sensate Focus project, which switched from deconstructing deep house to reassembling the shattered pieces of footwork; also taking bass in a decidedly odder direction was Al Tourettes, who released the Margosa Heights EP, his first record under the new Second Storey name for Houndstooth, combining churning subs with abstract tones and bubbling electro arpeggios. Of course there was still room for two straight up grime bangers, as Bandulu delivered Kahn & Neek’s incendiary Chevy 12″.

House heads were spoiled for choice this week, but a clear winner could be found in the latest 12″ for Anthony Parasole’s excellent label The Corner, as Fred P delivered BQE, a stellar trip robust, hi-resolution techno of the Ostgut Ton variety, the improvised keys of “Tube Compression”, hypnotic backdrop of “Storm Clouds” and mid-tempo bounce of “State Of No State”. Crème also coaxed some excellent remixes of Neville Watson’s Songs To Elevate Pure Hearts album out of DABJ regular Marquis Hawkes, KiNK & Rachel and Moon B, with uplifting house, detuned acid and classic house with fuzzy edges the order of the day. Add to that an excellent split EP between the prolific Legowelt and Willie Burns for the Beyond The Speaker label, and a low key 12″ on Bandura from Vakula, and you’ve got one of the most satisfyingly varied collections of house records for a while.

This was also a bumper week for fans of Jamal Moss as two records slipped out under two of his aliases. The first was under his best known moniker, Hieroglyphic Being, with The Electronic Belt, which arrived on the Alter label run by PAN artist Helm; despite the more experimental leanings of Helm, this release provides some of Moss’s more accessible music. The other saw him return to his Sun God alias for another single on Paul Du Lac’s Bio Rhythm label, with The Nine Billion Names of God providing some typically rough acid jack.

Similarly tough was Fokus, the debut album from Berghain resident Marcel Fengler on Ostgut Ton. Although it contains the expected kind of house and techno to fill a Berghain-sized room, its really Fengler’s use of ambient textures that sets it apart. It was something also present in Chevel’s debut for the Vae Victis label, which combined raw analogue beats that verged on the industrial alongside gently drifting pads that gave the whole thing a curiously ’90s feel. As good as these were, they couldn’t hold a candle to DJ Stingray’s return to [NakedLunch] with NKKtwo2, which saw two of his finest Drexciyan electro cuts pressed to a fetching grey splattered 10″.

Hovering around the fringes this week were several intriguing releases, not least of them The Word Is Power, the new album from Lustmord on Blackest Ever Black, a suitably dark seven tracks from the dark ambient pioneer whose theme seems to concern the power of the word, something reflected in its elaborate cover design, which takes a suitably cryptographic approach. The excellent left_blank label also returned this week with the debut release from Saa, a duo formed of Old Apparatus member A. Levitas and Oslo-based vocalist Linn Carin Dirdal, whose self-titled EP blended the kind of moody fusion of dubstep and hip hop Old Apparatus are known for together with a spacious blend of pop. At the rougher end of the scale, 50 Weapons producer Anstam made a surprise appearance on Meakusma under his Anno Stamm alias with the skewed techno of My Peoples Head, and Digitalis reissued Great Dose of Monotonous Techno; originally released on Frak’s Börft label in 1992, it was the work of the late Joel Brindefalk, and prefigures much of the current trend of noise techno by some way – as such it comes highly recommended.