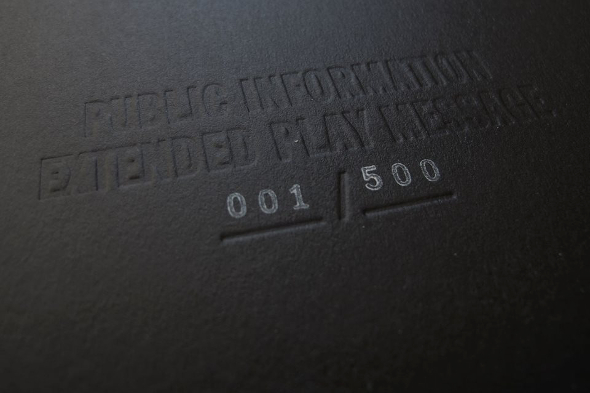 Initially hinted at via our interview with the label in April, IVVVO’s label debut marks the first of a series of limited edition 12″s “aimed at those dancefloors with nary a Guetta in sight”. Having previously focused on the darker fringes of electronic music, with full-lengths from the likes of Ekoplekz, ADR and Love Cult, a compilation of work from early electronic artist F.C. Judd and a collection of library music from Canada’s Parry Music Library, the new series marks something of a change in approach for the label.

Hailing from Porto, IVVVO has already achieved some notoriety with All Shades Of White, a 13-track cassette of gauzy techno for the Opal Tapes label, whose sound had hints of fellow countrymen Photonz, Actress and Lee Gamble in its dark yet minimalistic sound. The forthcoming six track Future EP for Public Information sees the producer continue to develop this approach, with the label describing the sound as “vinyl scarred, abrasive and heartbroken”. The EP combines reverb soaked, melancholic chords together with “stinging hats, tweaked vamps and nagging hooks” and each side is concluded with a piano miniature supposedly played on the producer’s grandmother’s piano, described as a “funereal flourish to the Death of Rave”.

The new focus also sees the label adopt a slightly different presentational approach; unlike the full artwork of their recent releases, these new 12″s sees new die cut, individually numbered sleeves being utilised. A preview of the release can be heard below.

Public Information will release Future EP by IVVVO on 12″ on June 17. IVVVO will also be playing alongside WANDA GROUP, Basic House and Nochexxx at The Waiting Room in London on June 28 part of a Public Information vs Opal Tapes night presented by BleeD; more information and tickets for that can be found here.