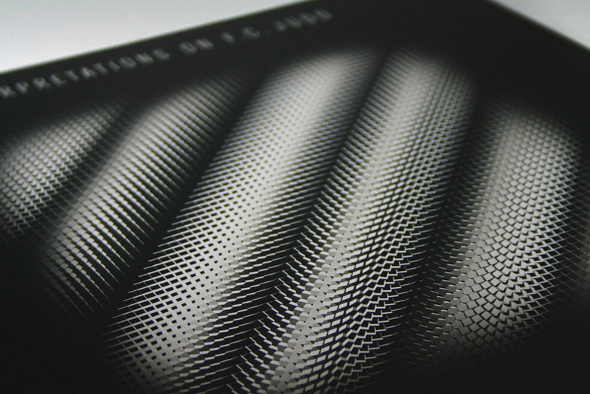 Those who are familiar with the output of Public Information – which has carved itself an interesting niche in library and early electronic music reissues, cracked sonics from the likes of Ekoplekz and Austin Cesear, and monochrome pop from Acteurs and Love Cult – may be surprised that its latest record is, for want of a better description, a collection of remixes. The label has so far shied away from getting other artists to reinterpret the work of those on its label, choosing instead to hone an aesthetic that inhabits a dark musical world running parallel to any current trends in experimental electronic music.

Interpretations on F.C. Judd sees the label return to Electronics Without Tears, a collection of works from underappreciated figure of early British electronic music F.C. Judd; the original collection’s combination of musique concrète sketches and instructional pieces wasn’t simply a collection of experimental music from the ’50s, but something of an insight into Judd’s personality and working practices too. It’s refreshing then, that the artists on Interpretations have been well chosen not just for their own work’s relevance to the source material, but that they keep some of Judd’s uniquely English personality intact too.

Nowhere is this more evident in Judd biographer Ian Helliwell’s “Solid States”; an audio visual artist in his own right, Helliwell largely stitches together recordings of Judd’s own voice into an uneasily shifting vignette that feels like listening to the dial turn on a shortwave radio. A similar effect is had on Perc’s “Woodford”, which slows down Judd’s voice into a lumbering rhythm track filled with piston-like clatter. For those used to hearing Perc’s techno work, to find him so adept at creating what amounts to genuine musique concrète is quite a revelation. Chris Carter’s “Flip-Flop” is a similarly queasy collection of tones with Judd’s disembodied voice buried within, while Holly Herndon’s “Control Sample” goes even further, taking a scalpel to Judd’s voice and scattering it like confetti amongst minimalistic, metronomic rhythms.  But it’s Mordant Music’s “Hoarded House” that is the most unsettling, placing a sample of the deceased Judd saying “I no longer exist” among the macabre sound of tape warping, giving it some of the suggested supernatural qualities of an EVP recording. Though the label has always seemed to have something of a fascination for music with ghostly textures, to hear it done so explicitly is still something of a shock in this context.

Following this run of tracks, Judd’s voice becomes largely absent and more attention is paid on the tones of Judd’s work itself; the precise kicks and woozy synths of The Boats’ “Space Judder” sound like they could be early Autechre, while Pye Corner Audio’s “Splice Block” layers hacked up rhythms over an ambient mulch of concrète tones. Leyland Kirby’s “Slim Jim Wimshurst Mechanicals” creates a thunderstorm backdrop for his cacophonous factory line rattle; after all this, Karen Gwyer’s “Judd Drums” – with its North African rhythm and languorous kosmische melodies – comes across as one of the most joyously colourful interpretations of the lot.

The final three tracks see the bleakest, most alien interpretations of Judd’s music; Editions Mego boss Peter Rehberg’s “FJUDDmix 032013” is an austere study in reverb that reduces Judd’s tones to its bare electrons, while Hessle Audio’s Bandshell surprises with a drum-free slurry of sub-bass and decrepit, apocalyptic sirens. It seems fitting that Ekoplekz – the only Public Information artist to contribute – should round off proceedings. His alchemical sound manipulations and DIY approach feel the closest in spirit to Judd’s, while his music gives off that same sense of listening to the Radiophonic Workshop style sounds coming out of a black and white television in 1960s Britain. In truth though, all the tracks on the compilation are similarly respectful, and Interpretations is not just a fitting tribute to Judd’s work, but an excellent primer for anyone wanting a way into Public Information’s darkly engaging sound.