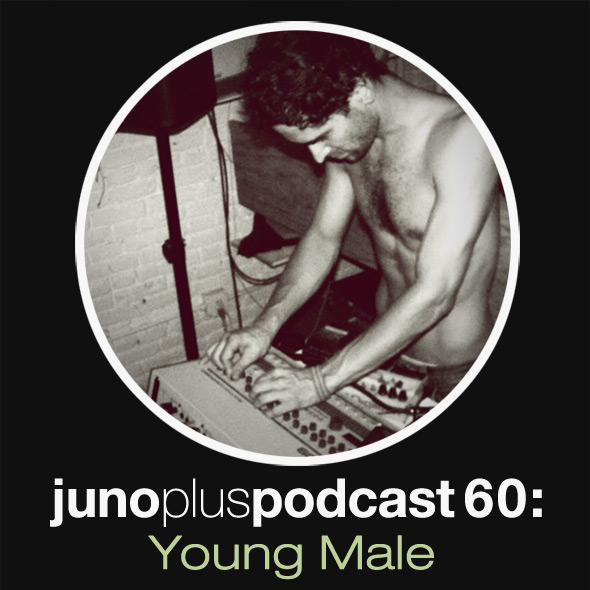 We head over to New York for some working man’s techno from White Material co-founder Young Male.

We live in an age where new labels are seemingly announced on a daily basis, making it hard to decipher the great and the good from the mediocre. Launched in August last year, but only appearing on our radar at the start of 2013, White Material came out of nowhere and stood out in an increasingly diluted 12″ market thanks to the label’s strong visual aesthetic and some illuminating material (no pun intended) from its co-founders Young Male and DJ Richard.

The label’s inaugural records both demonstrated a raw approach to house and techno production that had much in common with the output of L.I.E.S; DJ Richard’s Leech2 provided an unlikely combination of industrial textures and ghetto house influences, but it was Young Male’s All R that provided the most strikingly monochrome record. Across three tracks it displayed more commonality with the sleek productions of Function and his Sandwell District associates than anything to have been inspired by America’s contemporary noise techno artists, pitched somewhere right between classic Detroit minimalism and the more forceful techno which was prominent in New York in the early 90s.

The apparent lack of back story behind White Material and its founders had us intrigued to find out more, so we got in contact with Quinn Taylor – the man behind the Young Male alias – for this week’s Juno Plus podcast, which takes in just under an hour of iron clad techno from the likes of Function, Regis, Rivet, Pacific Blue and Diversion Group, as well as appearances from White Material family DJ Richard and Galcher Lustwerk. Taylor also took the time to answer some questions about the thinking behind the label, his music, and the best place to get pizza in New York.

Hi Quinn, how are things?

Things are good man, I’m just trying to do as much as I can every day. Work hard and also enjoy my life a bit. I really wish the day was 36 hours long instead of 24.

Thanks a lot for doing this mix, what can people expect?

Well….to be honest I feel like there are some points in the mix that drift and there are also some sick moments where I was able to execute my vision very clearly. It’s not perfect and you can hear that, but I think you can also hear me trying a few things and taking risks which I think is what I always hope for in a mix. Flawless technical mixing is cool, but I think I prefer something that has some real flavor, some soul. Something that sounds like a person made it always hooks me. I spent about 4 days figuring out the tracks then I recorded in one take, using all vinyl and two Numark turntables with some garbage ass cartridges.

White Material was started in New York during the summer of 2012 by myself and my friend DJ Richard. A pipe dream at first, which slowly took form and became more serious. I think we simply felt this strong need to put our shit out there. We were surrounded by music that we loved and were inspired by and it dawned on us that our favourite producers were all of our friends! White Material is a name for this crew of friends making music and for the label. We’ve all known each other for a long time and at a certain point we were like “this is us, this is music that we believe in, it’s time to do something about it”. Once the idea was hatched It was going to happen no matter what. I was saving every dollar, working full time, I didn’t give a fuck if it bankrupted me, all that mattered was that this music got released. 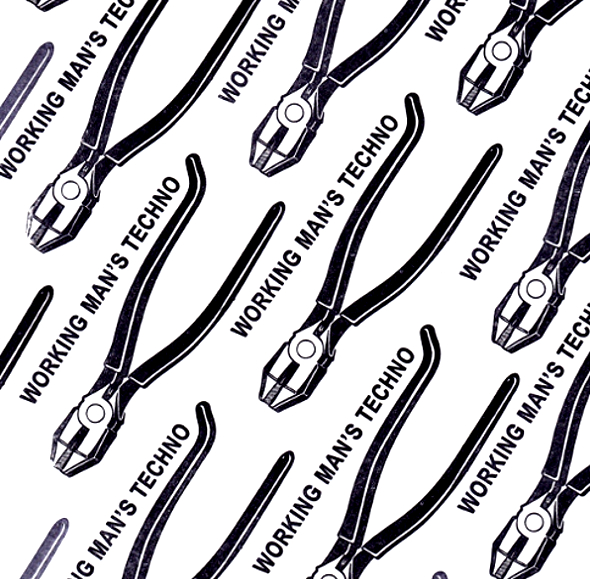 There’s a distinct visual aesthetic too, can you explain the “Working Man’s Techno” theme?

Haha! “Working Man’s Techno” was an idea that came from my day job. It was something that i thought a lot of people could relate to. Techno made by a person who works for a living Y’know. I was making tools by hand. Filing, shaping and grinding hammers and saws. I would spend 7 hours a day grinding steel, a lot of times composing tracks in my head while working. I’ve always worked insane jobs that are physically and mentally difficult. “Working Man’s Techno” is a very honest description of my music. I wanted to put a little taste of my life into the aesthetic. That’s what I always look for in music, a hint of a real person with a real life. S/o to anyone who is courageous enough to express themselves. It’s one of the hardest things for people to do.

There’s a quality and accomplishment to the Young Male material that hints you are no newcomer to production, how long have you been making music for?

Damn, that’s cool as fuck of you to say. I guess I’ve been making music in one form or another for a long time. Most of my life. I played guitar in high school. Y’know like punk rock bands and indie rock, but my friends and I always had this really weird sensibility, making wacked out and super unpopular music. Then I moved to Providence, Rhode Island for school and started playing drums in a few noise bands. I made some harsh noise stuff for awhile. Then somehow I just became obsessed with electronics and synthesizers. I fell in love with the idea of a human being making music using machines. Sitting alone in a bedroom working with boxes that turn electricity into nuanced sound that people dance to seems like one of the most futuristic and generous things a person can do.

Can you tell us some more about what’s coming up on the label and who is involved?

11 releases are scheduled at this point. Basically all unknown producers. A pretty wide variety of stuff. I can throw some names out but I don’t know if they’ll mean anything to anyone. Next up is WM003 from Galcher Lustwerk. He and I have lived together for the past five or six years. He’s a producer who inspires me in every way possible, and I can’t wait for other people to hear the stuff he works on. His record comes out in a day or two exclusively at Honest Jon’s. Check it out on the White Material Soundcloud page. After that Alvin Aronsen, Ramdrolk, Morgan Lious, a new Young Male record and a new DJ Richard record. There will definitely be some departures from techno also. We want to put out records that surprise people and push boundaries a little, so keep an eye out.

You’re currently in Berlin and playing some gigs with DJ Richard, how are they going?

I’ve only played one gig so far. It was last night and it was killer. At one point I heard a girl just screaming during my set, I was psyched, a pretty amazing compliment. A great crowd, a sick venue. The party is called Source Material, It’s DJ Richard and Mo Probs’ monthly party. I opened for Traxx who destroyed too. That guy rules. Playing music for people is a really special experience, I hope I can do it for awhile. I don’t give a fuck about money, I just want to shred some shows and hopefully make people lose their minds.

What are your favourite spots for record digging back in NYC?

I have two spots that I go to in New York. A1 Records when I want to surprise myself or buy L.I.E.S. stuff direct from the source. I got the INXS track that I put on the mix from there. Halcyon Records in Dumbo is the spot I go to when I want straight up techno. Both stores are full of dope ass vinyl. I’m so thankful they exist.

I been to New York a few times and Grimaldi’s was always the spot for the best pizza, is that still the case or is there a new king in town?

I love this topic….you know what…..I actually like this shithole called Mario’s on Dekalb. Haha! It’s this tiny place that has such a good vibe. Just this one dude making pizza, every day he’s there, making pizza. Love it, hate it, he doesn’t care, it’s what he does. It’s a cool place. I chill there with my girl sometimes, she loves pizza. Hi Mom. Woof.