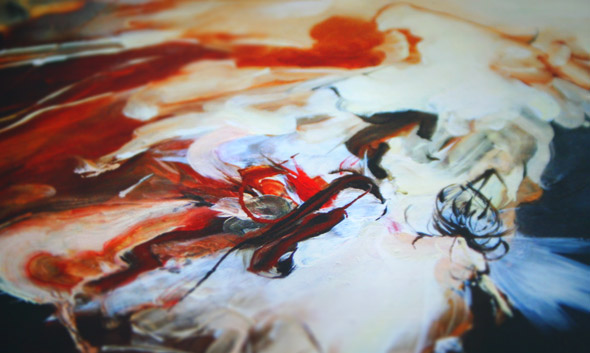 On the surface, Felix Manuel’s output as Djrum seems to capture the zeitgeist of ‘post-dubstep’ or whatever other tag gets applied to that particular spin-off from the original bassweight sound. The melancholic chords, displaced vocal snippets and crisp beats are certainly not on their own in these times, and previous singles for On The Edge and Smokin’ Sessions tapped into this idea with aplomb. Now settled nicely into 2nd Drop Records with two EPs behind him, Manuel delivers his debut album and in turn gets to expand on the more unique facets in his sound.

One element which has always stood out in Manuel’s music is his use of instrumentation, and on tracks such as album opener “Obsession” you can find yourself revelling in the lingering power of the forlorn strings which sit on top of the breakdown without even realising what the sound is. Rather than some brazen slap-down of this cello or that clarinet, Manuel has a real gift for weaving these more organic elements into the crisp digitalisms of the rest of the track.

The same trick appears in “Honey” where a distant sample of reggae horns drifts in and out of the mix along with crafty drops of Indian strings, while all around mechanical bass and hyper-detailed beats fit and start in a drawn-out dubstep groove. It speaks volumes for the skill Manuel has in terms of production, blending such disparate elements into a flawlessly smooth finish, while keeping the track dynamic and engaging throughout. There’s also a pleasing willingness to mix up the tempos within tracks, as on the deft switch-up that takes place in “DAM”. Starting off on a tweaked hip hop beat, Manuel gently teases the track towards a bass-rich breakdown which then starts up again in a snappy new suit at 140 bpm, sending the track pirouetting off on a wholly other tangent.

While these are all smart tricks that demonstrate the skill Manuel has been honing, they are merely vessels for the vibe that he brings. It’s an immersive one from the off, perpetually tapped into that melancholic vein that can elicit emotive music at every turn. Were it not for his careful use of traditional instrumentation, Seven Lies might drift somewhat amidst the melee of producers doing similar things.

Certainly it would be interesting to see Manuel experiment with different temperaments in his music, and tracks such as Autonomic-powered album closer “Thankyou” hint towards other possibilities for his sound, but it seems clear that he has found a style that works for him, and he seeks to explore every possibility within it. While it may deliver the same feeling in many places throughout, in the end such an approach leaves Seven Lies as a thoroughly cohesive, immersive body of work.