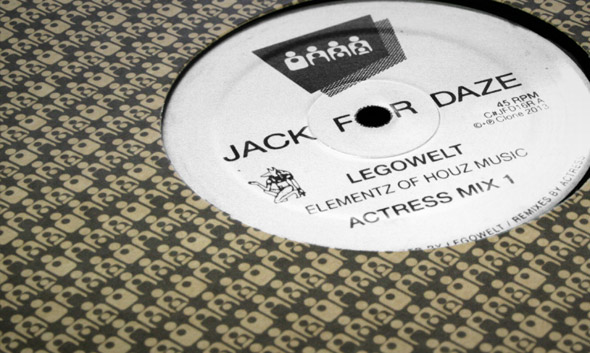 Actress and Legowelt may not come across as very compatible at a glance, but they actually have quite the shared heritage. Both of their catalogues trudge through the difficult-to-pin-down territory between experimental and dance music, and each producer appears capable of balancing their introverted and extroverted sides by managing an eclectic output while retaining a hermetic loner mystique of sorts.

For Danny Wolfers, Legowelt is only one alias in an extensive catalogue of pseudonyms and divergent side projects; a whopping 22 and counting that are public knowledge at this time. Likewise, Darren Cunningham’s decision to name his main creative focus Actress implies a fluidity of identity and genders that step away from the notion of any “authentic” or “true” self. Since both producers seem to be most at home when playing around with identity, bringing these two experimental bruisers together on Clone’s imitable Jack For Daze label is as exciting and unpredictable as throwing two darts at elements on a periodic table, stirring them up in a flask and chugging down the results. This 12″ is many things: surprising, monumental, confusing, transcendental, and possibly difficult to stomach, depending on your constitution.

Though the track Cunningham is remixing is named “Elements of Houz Music”, he’s not abiding by any kind of textbook classical dance music rules in his deconstruction of it. Elements are slightly different than foundations, after all. Instead, Cunningham clenches onto Wolfers’ original and pulls it down into the realm of dingy self-reflection, discarding the melodic rhythm and tropical brevity of the original and replacing it with two muddy, heads-down shuffling odes to the underbelly of perpetually rainy East London.

“Mix 1” touts a number of body-animating revisions: Immediately noticeable are the spring loaded blips that trickle over the track in a frenetic and unsettling manner. These synth percolations command the movement and flow of “Elements” and dictate a breakneck pace that soft hi-hat smacks try to keep up with. The inclusion of a reverberating organ throughout heightens the ominous hum of chanting that permeates into the core of Cunningham’s mix, interjecting a bit of wordless mysticism into the head-bobbing, body-jerking affair.  The monastic, spiritually devout undertones of “Mix 1 make sense, considering Cunningham’s beliefs. Last year, bereft of irony, he told The Guardian that he “wouldn’t be able to write the music that I write if I didn’t believe in God, trust me.”

Cunningham’s unblinking spirituality is compelling, but perhaps it highlights the only element lost in translation from Wolfers’ version: humour and warmth. While Legowelt’s original sported a winding melody that looped around flitting drums and the faintest hum of Chicago techno sounds, it’s been replaced by a sombre barrage of puncturing synth lines and hushed hymns. Just like recent Actress LP R.I.P, “Mix 1” is just as concerned with tackling the heavy topics of life and death, ascension and redemption in a dance format; John Milton’s Paradise Lost for the 3am club crowd.

However, for all its solemnity, “Mix 1” is still a dance floor stomper compared to what’s on the flip. On first listen it might just seem that “Mix 2” is simply Actress’ first mix slowed down by 400%; a version that the economical DJ could recreate themselves by playing A-side at 33 RPM while pitched down as low as possible. While those approaching the Jack For Daze label as a sure-fire source of club material may be perplexed by this offering, “Mix 2” exemplifies the qualities in music that Actress holds dear: deliberate drowsy slowness, leaden heaviness, and gradual movement in small increments.

After several listens, the inclusion of the sludgy, twelve minute spiritual on the B-side comes across more much more meaningful than a pitch dropped imitation of the flip. This writer would argue that “Mix 2” is Actress is deconstructing the track piece by piece; cracking open its ribcage and peering around at the pulsating core inside. When a dance song is ground to a near-halt, the listener is forced to study every kick drum, percussive hit and synth touch as its own entity. Every instrument takes on a deepened significance when delivered to us as a sustained droning note, and In this sense, Cunningham’s “Mix 2” is a direct homage to the name of the track, inviting the listener to examine what elements cohere together to construct this spiritual, weirdly powerful thing called ‘house music.’

Still, this EP isn’t the most accessible dancefloor burner that Jack for Daze has concocted, and folks looking for Chicago house anthems might be wise to turn to other releases from the series. But for those who like their dance music with a heavy dash of introspection, these two mixes from Actress provide interesting focal points for the philosophically minded club-goer, and show that sometimes, it’s important to take things slow.