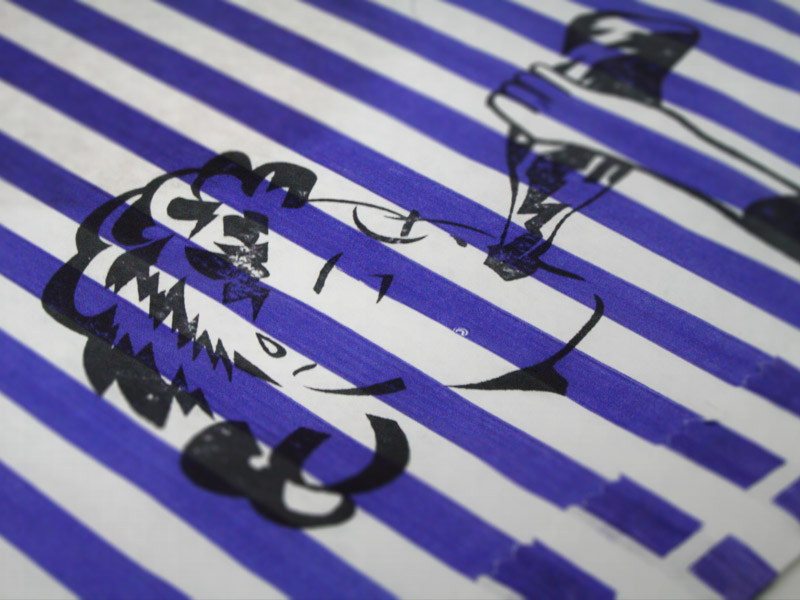 Just twelve records feature in our March selection – though each stood out for their own reasons.

Funkineven’s Apron label scored one of last year’s most distinctive sleeves with the sweetie bag wrapper the Chips & Sweets 12″ arrived in, with the three coloured vinyl variations ensuring the rarest is currently being offered for a rather princely sum by some wishful Discogs sellers. The first Apron release of 2013 once again calls on the design skills of Benedetta Sodini with Dreams Of Coke wrapped and sealed in a similarly alluring candy-striped paper bag – leaving you to ponder the choice; keep it sealed and untainted to cynically profiteer at a later point or enjoy the music within.

In other cases, the most impressive aspect of a record’s design came unexpectadly after you’d eagerly dived in to hear the music; the most explicit example being Nightshade, the long overdue album from DVA Damas. Chosen to launch Downwards America, the grandly titled stateside offshoot of the Midlands techno label, the vinyl edition of this album was presented in requisite style. Shrink wrapped in a plastic sleeve that also held the CD copy, when you slipped the LP out of the standard Downwards sleeve design you are greeted with two paper inserts; a semi transparent slice of wax paper with the album credits and a black and white photo print of band members Taylor Burch and Joseph Cocherell.

The cover art for Trus’Me’s latest album proved so contentious that it seems Prime Numbers elected to change it at the last minute. No such issues clouded the label’s triple vinyl Trus’Me Remixed release in cahoots with baggy jeans emporium Carharrt. This release clearly allowed designer Josaiah Chong the chance to expand on his artistic input on the three Trus’me Remixes 12″ that were released last year, with the resultant bespoke printed sleeve the kind of patterned imagery that seems ripped out of some unheralded fairytale.

We’ve mentioned previously how integral a part the cover art plays in the enduring appeal of records from The Trilogy Tapes and Morphine and last month’s 12″s from Anthony Naples and Container once again demonstrated this perfectly. Mr Bankhead of course was responsible for the Busy Signal sleeve, and as striking as that lion that adorned the front was, the mushroom cloud in full bloom on the back was more indicative of the sonic results pressed on the vinyl. The Treatment 12″ saw Rabih Beani’s label look to a new creative source in Lebanese artist Maria Kassab, yet the results still maintained the distinct visual identity Morphine have developed.

Distinctive sleeve art has proved an intrinsic part of the Uncanny Valley approach since the Dresden label’s foundation when Paul Waak’s charming oddball cartoon depictions covered the initial Various Artist releases. Their artistic approach has become more diverse since then without losing any degree of visual impact, as demonstrated by the smudged photo print from Berlin based artist Lars Laemmerzhal that covers the label’s latest release by the mysterious Sandrow M.

Karen Gwyer’s creative talents stretched beyond the music on Needs Continuum, with the artist herself responsible for the interlocking, limb like alien organisms that adorn her wonderful debut album for No Pain In Pop. Revered graphics agency Check Morris offered a pitch perfect visual accompaniment to the blend of Herzogian exoticism and classicist house that was the third Antinote release by Albinos, whilst the enigmatic Chasing Voices collective returned with a fifth Preserved Instincts transmission that proved as aesthetically alluring as previous ones.

J Ginzburg’s bleak grayscale photography was a wise choice as sleeve art for Empyset’s three track Materials release for Subtext, whilst Astrophonica closed out their VIP series of 10″ inch releases in vivid style with the 2-colour screen printed Clissold VIP drop from Machinedrum and the chaotic explosion of triangular shapes that cover Port Carbon, Lowtec’s double 10″ EP for Brainmath would be enough to catch your eye and make you want to investigate should you be unaware of either artist or label.