Omar S – Thank You For Letting Me Be Myself 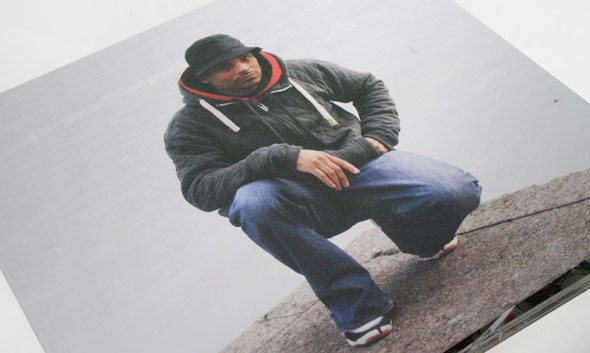 Unpicking the truth behind the public façade of Omar S is one of the things that makes him such an enduring character. If we’re to believe what he says, then he cares little for the concept of curation, and new long-player Thank You For Letting Me Be Myself is more of a compilation than a proper album, made up of some of the presumably hundreds of tracks burned onto CD that litter his studio floor under a layer of Nunn’s BBQ sauce and dusty footprints. It’s certainly how his last album felt at times – comprised of some new tracks with a couple of previously vinyl-only cuts thrown in for good measure, it never felt like it was intended as a cohesive listening experience.

Of course to complain about an Omar S album not being a cohesive listening experience seems like a fairly pointless exercise; more so than any of his contemporary Detroit peers, his music is made for dancing and little else, shying away from avant-jazz experimentation and narratives of post-industrial decline, his sound unashamedly mashes house, techno and soul into something that’s pretty much just, well, Omar S. His approach has always felt better suited to singles; the life-affirming “Here’s Your Trance Now Dance”, the electronic Motown vibe of “Tonite” or the wistful “Skynet 2 B” are each charged with a different kind of energy, but equally they demonstrate a man whose drifting attention span can make it hard for a casual observer to get a hold on what his music is about. Thank You For Letting Me Be Myself however feels different, and unlike his sometimes clumsily mood-shifting Fabric mix, feels like the unified encapsulation of the man’s personality we’ve been missing.

The first two tracks set the tone for the album to follow with their subtle contrast between thumping club gear and dusty, soul-tinged nostalgia. The Luke Hess-mixed “I Just Want” is a stern 4/4 stomper whose brusque synth horn and atonal keys could easily be mistaken for any of the current wave of pseudo-industrial techno; with its distant keys the whole thing sounds almost like a strung out, reverb heavy reimagining of Jeff Mills “Changes Of Life”. It segues surprisingly well into the housier “Air Of The Day”; despite its wistful pads, the curt, rough-edged bass arpeggio, sharp snares and sunken melody feel like the textural mirror image of its neighbour – even if the reference point is more Chicago. They’re quite different in their own ways, but ultimately they’re both raucously triumphant, just like the laid-back swagger of “Be Yoself”, and “Rewind”, whose L’Renee vocal is coated in waves of nostalgia for the sounds of early 90s MTV.

Putting a finger on what gives Omar S’ music its uniquely triumphant quality is hard, but on listening to this album it’s clear that it lies somewhere in the percussion. When it comes to drums, Omar S isn’t a man of subtleties, choosing to crank up the volume on the drums up for maximum effect; “Thank U For Letting Me Be Myself” for example sees claps are as loud as the nonchalant bassline, while the hi-hats of “Amalthea” cut through the serene keys like a mechanical meat cleaver. Nestled within these simpler club jams are some stranger moments; “Hellter Shelter” is an abstract dub-techno jam with all the lo-fi sludge of Ron Morelli DJing at the bottom of a well, whilst the distorted kicks and wiry frame of “Tardigrade” could be mistaken for some of Container’s mono hardware jams, and “Dumpster Graves” is a strange balance of sleepy MIDI soul and spitting kickdrum. Ultimately though, their power all comes down to the high-definition percussion they share. Put quite simply, he knows to get your blood pumping; it’s a simple trick, but it works.

It’s this sense of excitement that pervades the album that gives us this unique window into the producer’s psyche, especially when stretched out over 80 minutes rather than confined to singles output. Given Omar S’ brash, give-a-fuck mentality, many may misinterpret the man as all ego and nothing else; with Thank You For Letting Me Be Myself having the name it does, replete with a back cover featuring the producer posing with a sportscar, it would be particularly easy to come to this conclusion. But within the rip-roaring “The Shit Baby” – easily the highlight of the album – there’s a complexity on show; tied up in its straight muscular rhythm and sinewy bassline is an improvised piano line that adds an emotional nuance you don’t often hear in an Omar S production. It’s obvious that Omar S has always been proud of himself and his roots, but rarely has this pride showed through so honestly – and infectiously – as it does on this album.