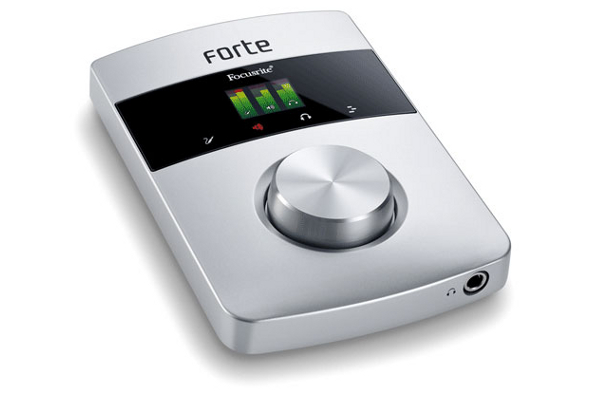 We look under the hood of Focusrite’s new entry into the crowded USB audio interface market.

Focusrite have been creating professional grade studio equipment for over  25 years, and you’d be hard pushed to find a studio without some of their gear being used on a day to day basis. Although the first product to bear the Forte name was a hugely expensive recording console released in the 1980s, Focusrite have revived the name for their new flagship portable audio interface, the two in/four out, Forte desktop interface.

The Forte comes in well turned out packaging that mirrors the excellent build quality of the device. It looks conspicuously like an Apogee Duet, only slightly wider, and has a pleasing amount of weight to it which gives the feeling of a device that will stand the test of time as well as the rigours of daily use.  Its curved aluminium chassis meanwhile is sleek and sexy, with a simple, uncluttered face with an OLED screen for visual feedback and one single push encoder for controlling parameters. The encoder knob feels a lot tougher in comparison to the Apogee Duet’s, with a pleasing weight to it, and a lot less wobble, while there are also four touchscreen-type function buttons on the main screen that allow you to switch between input, speaker, headphone and DAW control modes. Once the required software is downloaded, installing is simple, and getting to know your way around the simple control software is equally breezy, while a serial code for unlocking Focusrite’s Midnight plug-in Suite is an added bonus.

After connecting monitors and hooking up the breakout cables, which allow for two inputs through either XLR or ¼”TRS jacks, navigating the work space on the Forte is logical. There are four modes, the first of which on the far left is the input controls. The encoder controls the input level, whilst a brief push of the input mode button will toggle between input one and two. An extended push of the input mode button will allow you access to more detailed controls such as the type of input (mic, line and instrument), phantom power, a high pass filter, phase reverse, pad and link that gives you singular control over inputs one and two. These comprehensive tools, designed for the purpose of getting the right audio level into your computer are easy to get your head around, and the results were good with no noticeable latency or digital sludge masking the sound.

Focusrite are rightly proud of the quality of their mic pre amps and this is something that they have made no exception with on the Forte. The headphone and speaker modes are completely independent of each other, and this independence extends into their more detailed functionality. After a long held push of the speaker or headphone mode button, you’re offered independent mute, dim and summing to mono by scrolling and clicking using the push encoder, though it might have been nice if the push encoder could control one of these three functions when not in the extended mode or there could have been a way of assigning this control in the software. What the DAW mode does do is to turn the interface into a kind of controller for your DAW of choice. For example, in this review we used the Forte with Ableton Live; in DAW mode, clicking the encoder functioned as a play/pause button and turning it allowed you to zoom in or out of selected objects.

Aside from its functionality, perhaps the most important aspect of any audio interface is how it sounds. And the Forte does sound good. It has that airy, spacious sound with very little dirge getting in the way; it’s the sort of sound you expect from a modern audio interface which gives you the feeling that you could almost reach your hands into a mix. Part of the reason for this is the attention to detail that Focusrite have put into the digital conversion process. Poor AD/DA conversion is often the thing that will hurt the producer and engineer when it comes to the final mixdown, and much has been made of the fact that Focusrite test their converters using the AES17 (Audio Engineering Society) standard for the measurement of their audio equipment. The chipset that is used in the Forte has a dynamic range of 120dB (A weighted) but in the unit itself, it clocks in at 117dB going in and 118dB coming out. Put simply, there is a minimal loss of dynamic range in the actual use of the the Forte, allowing you to record at 24bits with sample rates up to 192 kHz.

Comparisons are inevitably going to be made with Apogee’s Duet but where the Forte is designed for use with both PC and Mac, the Duet is Mac only. However, the Duet has a simpler and more intuitive control design and it does allow you to link interfaces together; its control software is also more extensive than Focusrite’s, but when it comes to build quality, the Forte is the clear winner. The Forte also allows you to play back audio in a low power mode that is used when the 5V DC power isn’t connected, which is perfect for use with a laptop when you are on the move. The Forte also has competition in the form of RME’s Babyface audio interface that is equally small with a lot of the functionality that both the Duet and the Forte have, but it doesn’t ship with a power adapter meaning the output volume is somewhat limited, while there have also been a few grumbles over the overcrowded output panel around the back.

If you are a PC or Mac user and you are looking for a simple desktop interface with great sound and fantastic mic pre amps then the Forte from Focusrite will deliver what you need. If you are a DJ or a producer that is constantly on the move and need a flexible audio interface for recording during the day and for use in the club with your digital DJ set up at night then the Forte is a very handy tool. The added bonus here is that with a superior build quality and accurately tested digital conversion, you can be confident knowing what you have will last.