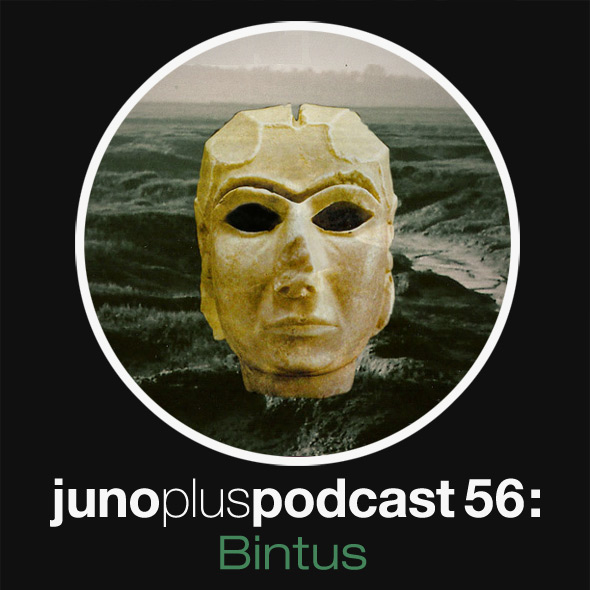 Jacking into sight from deep within the aqua-zone, Congolese acid warlord Bintus arrives to mix our latest podcast – a time capsule to the birth of rave music.

Bintus is of course the latest alias of Milo Smee, long term denizen of underground music currently orchestrating a campaign of acid-fuelled, breakbeat-driven, dark rave techno through the Power Vacuum label. Smee was on the cusp of launching Power Vacuum when we tasked Call Super producer J R Seaton with interviewing him just over a year ago, and its three releases thus far have successfully established a distinct identity for the label.

At a time when many feel all you need is a hand stamped white label and a substandard attempt at  Blawanism, Power Vacuum excels thanks to some murky, primal rhythmic deviations complemented by amusing track titles (“Drink Ye From The Acid Chalice” duking it out with “I’m Rushing My Tits Off” for our personal favourite) and the most wonderful press releases. It’s proved to be a successful ploy with the likes of Surgeon, Rivet, Ben UFO, Paul Woolford and Objekt all sucking up the Power Vacuum output to date.

In advance of the label ushering in the return of Dissident all stars Invincible Scum aka Andy Blake and Milo Smee with the adroitly titled Scumrush, we took the opportunity to invite Milo to lay down a Bintus mix for us with the resultant 60 minutes and 41 seconds providing an uncompromising slalom through late 80s and early 90s techno that doesn’t relent for one minute. He was also kind enough to answer some questions we pushed his way which finds him in typically affable form.

Hi Tony, no complaints thanks – trying to shape my environment to accommodate my peculiarities, as usual.

Where was this mix recorded and how?

The classic as far as I work; borrowed 1210’s into the computer with a mixer that has a nice echo – then rewinding & going again if it doesn’t work out. Some preparation lining up tracks beforehand etc. The venue was my small studio.

I guess you’re trying to convey some context for the influences behind Bintus here right?

Yes, there’s definitely that going on. Its heavy on the techno this time, which is my original starting point and probably dearest of the three ‘mother’ blueprints (the others being electro and acid) that I always come back to when DJing. The soundtrack to my clubland baptism was early hardcore rave, which sounded like the people making the music worked very hard to make terrifying, never heard before sounds – a good thing obviously. Going back the following week you would hear a new batch of hardcore even nastier – but always with the all-inclusive 4/4 ‘community’ beat, so your only choice was to get down like everyone else. With this mix I put a few of the more unusual tracks that I don’t play out much – there’s some horrible rave moments in there, which I naturally get immense satisfaction from, and even a bit of breathing space.

At the outset of the Bintus/Power Vacuum project you said you were looking to achieve sonic grit – roughly a year on do you feel that you’ve achieved this goal?

Ahh did I? I guess so, and amongst other things that’s true. If you listened to the releases I think they deliver on that score. I would use a different word now, like sonic ‘interest’. ‘Grit’ narrows the band a bit which could be construed as simply distortion – I think I meant grit to encompass processing and manipulating your sounds, and so stamping your personality on them, which is of the utmost importance to me when I listen to demos or whatever. Anything that makes them stick out from the unquestionable glut of mediocrity – of which I’m aware everything I do fits into that category to someone else’s ears, but that’s what’s so fun about having circular arguments about one of the most subjective of mediums – everyone’s always right and wrong, so screw you pal.

You must be satisfied with the response the label’s had though?

Yes, pleasantly surprised. I hoped to find a little crowd that might be into the stuff I wanted to put out, it’s been very encouraging to have some of my favourite DJ’s and producers being supportive of this stuff, which is one great motivation to keep going – but another is having a few messages from random people around the world, completely unexpected – so, so far so good.

Have you managed to procure yourself a 303 and 808 or are you still working off all the material accrued when you borrowed TJ Hertz’s 303?

I don’t have that kind of buying power, and would probably buy other stuff if I did. I recorded loads and have an acidic stockpile that should see me to the point of wanting to do something different. It was a real joy to use those two historical machines which cannot be underestimated for our purposes, especially after spending some quality time with them. However, techno and its irresistible magnetism is pulling me in with the more recent stuff I’m working on – which is mainly stuff for live use, but I hope to get a releasable track or two out of that down the line.

Who is responsible for the vivid press releases that accompany each Power Vacuum 12″?

I’ll have to name and shame now I’m backed into a corner. It’s my old school mate Jim Clarke. He’s always been my go to man with written word stuff. He used to write stuff for Chrome Hoof too, where we some had spoken word passages in a track or something. One of those characters that when he’s had the right amount of booze after a meal and lets rip – ridiculous, poetic and hysterical, a top man in that game. I just hope to get a fraction of his flow into these press releases, but it’s never the same when you actually care about what you’re saying. His brother Will is the Bintus video man also.

The next release sees you re-engage the Invincible Scum project with Andy Blake; what made the two of you get back in the studio?

It’s actually quite an old one we did a couple of years ago. Geography means we have long stretches of not seeing each other, but Andy and I are very comfortable in the studio together – we trust each other’s judgement pretty much 100% even though we’re both control freaks in our own ways. That’s a rare pleasure when it comes to musical collaboration in my experience. I always thought it was one of our strongest jams but with Dissident being no longer, it just sat around. I would have tried to push it somewhere else, but subconsciously probably wanted it for myself, so when this label became a reality, I knew I could finally put it out on vinyl and play it out at plus eight.

There was a debut Bintus remix on a recent London Housing Trust 12” – do you have any more remixes lined up?

No more remixes lined up right now. Bintus is still pretty fresh to me, so keen to develop original material. If a request came in though, always happy to look at it.

You’ve been doing some Bintus live shows, correct? How does this manifest itself and what has the reaction been?

Yeah, just a few in the last year or so; I’m still tweaking it and writing material specifically for live use. I knew I didn’t want a laptop on stage so I bought an MPC for the third time (I couldn’t get on with its operating system initially).

It has 6 outputs, so I can mix parts live through a mixing desk – which is another visual, tactile part of the performance. I like playing things with my hands live, so I use it with an MFB acid box, RY30, outboard FX and a couple of other boxes I flip between to keep busy. Even if the music is phenomenal, when I see a performer transfixed by their laptop screen, I quickly find myself despondent – generally that is. It’s my problem I suppose, but I don’t have time to worry about this one.

The reaction has been good thanks, however I’m planning on spending some real time getting the set much better over the coming months, with maybe twice as much material than I actually need which will give me choices like when you have lots more records than you actually need for a DJ gig. Ultimately this will mean I’ll be more confident when it comes to that moment when the DJ starts being faded out – which should translate to everyone having a better night.

What else can we expect from Milo Smee, Bintus and Power Vacuum over the coming months?

Just carrying on would be ideal; put out banging trax, develop the Bintus sound and Power Vacuum label. I’m buzzing about what looks like the next couple of releases! I’ve been rehearsing with a bass player for about a year too, and hope to get back on the drums for some gigs – we just can’t think of a name for the band, which I’m not used to – even after a short-list of 100 names, we still can’t agree on one.