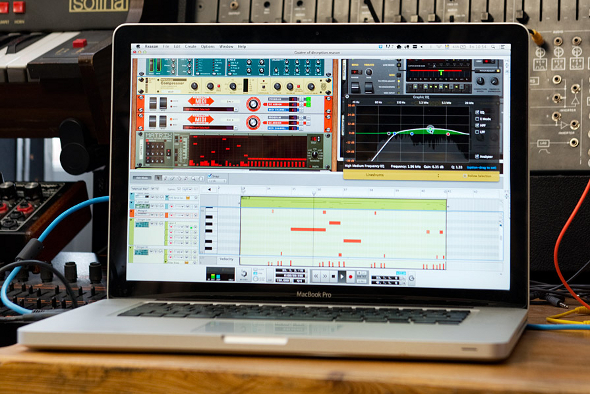 Swedish software house Propellerhead are the latest company to announce a major DAW upgrade with the advent of Reason 7.

Emerging in 2000, Reason’s on-screen work flow allowed the user to rack up multiple digital instruments and processors, all patched in via a virtual cabling system. Although software like Ableton, Logic and Cubase may have edged ahead in recent years, Reason remains unique in comparison thanks to its visual representation of traditional signal flow.

The big news for Reason 7 is that the software’s MIDI out feature can now support external sources such as hardware synths and drum machines; external units will now stay synced to the software, while captured audio can be sliced and recorded into single notes or hits. The MIDI signal is handled by Reason’s new external MIDI Instrument device which has been fully integrated into the new Reason environment. Propellerhead have also reduced Reason 7‘s click-count and screen-jumping by giving important mixing controls such as level and pan easier accessibility throughout the program, with arranging bus channels and grouping tracks also made easier.

In addition to these features and a whole host of new drum loops catering for all genres, Propellerhead have added a few new utilities; a new spectrum analyser window comes in built with Reason 7, giving instant visual feedback on selected channels or buses, while the Audiomatic Retro Transformer – described as “a future‑retro effect unit” – can be used to alter the character of a track. Propellerhead are being coy about the full functionality of the Retro Transformer, but it sounds suspiciously to us like digital music’s answer to an Instagram filter.

No firm release date has yet been announced, but Propellerhead suggest it will be available in the second quarter of 2013; those wishing to check it out in the meantime can preview its new features in the trailer below.