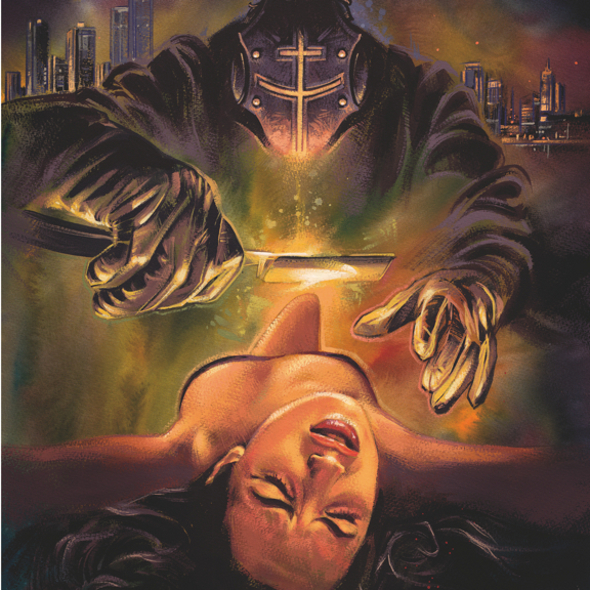 Given that Death Waltz – which has released bespoke vinyl editions of the soundtracks to films like They Live!, Escape From New York and Zombie Flesh Eaters in its short lifespan – is run by Spencer  Hickman, the Rough Trade East manager and organiser of the UK’s Record Store Day activities, it comes as little surprise that his label should have big plans for this year’s event. While some labels would be content to release one piece of vinyl to support their Record Store Day activities, Death Waltz have announced details of five brand new releases.

Leading the way are two LPs from contemporary synth mavens Antoni Maiovvi and Steve Moore. Horror disco producer and Giallo Disco boss Maiovvi’s original soundtrack for the contemporary horror short Yellow – about the “hunt for a vicious serial-killer in neon-lit Berlin” – is pressed, fittingly, on “yellow vinyl with blood splatter”. Steve Moore, who has been producing horror soundtrack influenced synth music for some years offers something new to the Death Waltz discography, with the label’s first documentary score, for the 2005 film Horror Business. Both 12″s will be limited to 1000 copies worldwide, come packaged in bespoke Death Waltz discobags, and come with 12″x12″ art prints.

In addition to these 12″ releases, Death Waltz will be pressing up their first 7″s, with three releases each containing two cult TV sound tracks. Each seem to be arranged thematically, with the original Star Trek theme coming backed with that of Lost In Space, the music to the unsettling anthologies The Twilight Zone and The Outer Limits sharing some wax, and the quirkier sounds of Alfred Hitchcock Presents and The Munsters occupying the final 7″. Like the 12″s, each will come with its own specially designed discobag and bespoke 7″ x 7″ artprint.

Each record will be released on Saturday, 20 April, and will be found in all good local record shops.