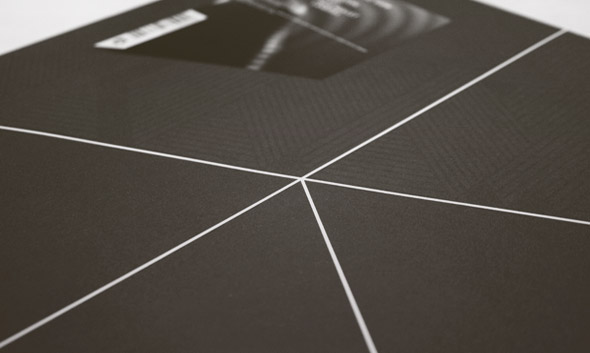 Bandshell’s Hessle Audio debut was one of the most striking records the label has put out in its six year history. Undeniably unique in its sound, Dust March recalled Actress and STL above anything else, and there was a certain structural lopsidedness to its tracks that made them difficult to engage with as dance music.

Muggy, stifling, and even paranoid, the compression saturated hiss which soaked into the EP suggested a producer fascinated more with dark, cloying textures than making tracks for the club – something the producer has confirmed. His relative inexperience was belied by a bass that just wasn’t quite powerful enough to rip through you chest in the way you felt it should. Perhaps things have changed since then, because Caustic View – the producer’s second EP, released on Mute sub-label Liberation Technologies – feels like the kind of record that was made to be heard on a dancefloor.

Although, like his debut, it takes the form of four quite different tracks, they all feel significantly more refined. Opener “Winton” blasts in like his debut’s “Rise Em” with the kind of tinpot percussion and subs designed to blow a door off its hinges. You get the impression that like Gerry Read, Bandshell obviously isn’t the kind of producer to spend time adding nuance to a hi-hat, and like Read, his complete lack of regard for “proper” production is exactly what makes his music as invigorating as a swim off the British coast in February. But “Winton” isn’t just a collection of abrasive sounds, it’s first and foremost an effective piece of jungle-inspired loop techno which sound like a collaboration between Jamal Moss and Pangaea – and far less unwieldy than “Rise Em”.

“Nice Mullet” meanwhile feels like a more concise version of his debut EP’s “Dog Sweater”. It’s a dubstep track in spirit but not in form; like Objekt’s “Cactus” it presents a sort of weird parody that ends up somehow being more pure than the real thing, with woodblock rhythms that move with a sort of perverse shimmy, its staccato bass as overpowering as a freight liner’s foghorn. The abstract clutter of linear snare rolls present on “Landfill” meanwhile are accompanied by a kind of mechanised fax machine drawl that soon gives way to a curiously combination of maudlin synthetic bombast and razor-edged bass.

Perhaps the most striking thing about this EP is that it’s almost entirely rendered in ragged, angled lines; beats and synths don’t flow into each other, they jut into each other at perpendicular angles. Although Aphex Twin or anything from the UK’s recent bass music past is an obvious comparision, oddly, it has as much in common with the electro house that artists like SebastiAn and Justice were making in the last decade. This shouldn’t be taken as a criticism – although not particularly trendy, the early work of both arguably still stands up – but more an observation that both parties make similarly harsh, monochromatic dance music which seems packed tightly into an irregular geometric collage.

All except that is, for the second track “Perc”, which provides a strangely calming melodic interlude. While the other tracks are the auditory embodiment of someone in a strait jacket throwing themselves around a padded cell, the contemplative sonar tones of “Perc” provide the record’s dose of musical valium. Despite it’s obvious differences, it doesn’t really stand out; like the rest of the EP it sounds like its been dipped in a biologically corrosive alkaline substance and had all human tissue flayed off.

Although Bandshell’s appearance on Liberation Technologies alongside the likes of Laurel Halo and British Murder Boys may not have seemed the most obvious of fits, he’s a worthy addition to an imprint that seems to be continuing Mute’s legacy of seeking out music with a unique signature quality that often defies description. As the producer himself has said, his music is  “I dunno… Bandshell-y?”