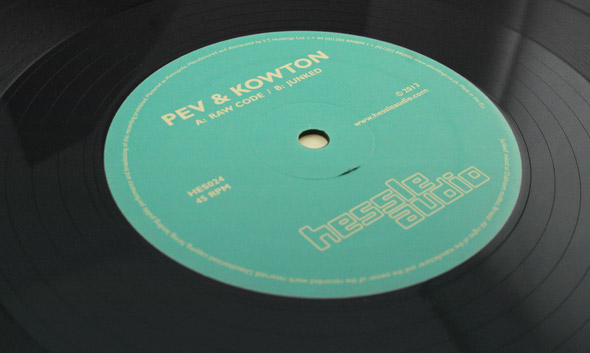 Peverelist and Kowton have individually been responsible for some of the most inventive dance music to come out of Bristol in recent times; though both have been creating genetic hybrids of dubstep, garage and grime for longer than the term “bass music” has existed, both seem to have hit a creative stride of late thanks to the Livity Sound label they run with Asusu and its accompanying live show. Like many artists who free themselves up by striking out on their own with a label that requires little more than a short run of vinyl and a hand stamp, it seems to have teased the most exciting material out of the pair.

The imprint’s first release was “Beneath Radar” – a 12″ with two takes on the same track from each producer. While Kowton’s version was propulsive and swung, Peverelist’s was more unpredictable in its nature, recalling his Skull Disco-era collaborations with Appleblim. But what was so striking about both versions was how each producer seemed to have taken sandpaper to each, leaving behind smoother textures for jagged, unpolished sound. If you could combine Shackleton’s polyrhythmic dubstep with Shed’s raw, mechanised funk then you’d probably come out with something akin to each producer’s take “Beneath Radar”.

Given that the Livity Sound label has previously been a comfortable home to such output, the duo’s appearance on Hessle Audio for a collaborative release comes as a very pleasant surprise, though an appearance on the label for Kowton is long overdue, given his championing by the Hessle triumvate of Ben UFO, Pearson Sound and Pangaea in recent times. And what an appearance it is.

“Raw Code” is easily the most instantly enjoyable thing either producer has put to wax. Opening with a frazzled synth blast that sounds like a 56k modem’s data stream, and the kind of rusty grime-influenced melody that has become Kowton’s calling card of late, the track’s initial weightlessness is soon anchored with a leaden bass and staccato percussive rattle that bears down with the force of a pneumatic drill. When it gets going, it has all the undulating motion of someone trying to regain their footing on a violently moving trampoline; it’s a devastatingly simple track, and one that puts into perspective just how static and lifeless the majority of techno’s contemporary fusion forms are in comparison.

“Junked” is a slightly different beast; its abstract radiophonic dub textures are feel more like Peverelist’s work, while its dense, shackling beats arguably feel more like Kowton’s doing. Although not as instantly compelling as “Raw Code”, it nevertheless breathes with a strange life; like Kowton’s solo tracks “Jam 01” and “Hunger”, it slithers with an uneasy kind of funk, but with its own abrasive textural quality that calls to mind Container’s hardware based noise techno, complete with rusty hi-hats that hiss like a venomous serpent roused from its slumber. It could easily be a counterpart to Pearson Sound’s highly effective drum tool “Clutch”, albeit one with a sinister character all of its own. In the context of Hessle Audio’s gradual adoption of slower tempos, this release fits into their catalogue very comfortably indeed.