Secret Circuit will release a new album on Tim Sweeney’s Beats In Space label in April.

Regular readers of Juno Plus should be more than familiar with Secret Circuit, the hugely prolific project of Los Angeles-based musician and artist Eddie Ruscha Jnr, whose dabblings in music stretch back to the early 90s. Beats In Space were responsible for bringing the distinctive psychedelia-tinged freeform electronics of Secret Circuit to wider attention with the release of Nebula Sphynx early last year, and Ruscha’s music has found further favour since then. Appearances on Prins Thomas’ Internasjonal label and the Emotional Response operation followed, with the latter providing some insight into Ruscha’s rich back catalogue of cassette recordings with the Tropical Psychedelics long player.

Ruscha returned to Beats In Space earlier this month with the Afterlife 12″ which gave a more prominent role to his own vocals, and as the producer himself alluded to in last October’s podcast, Tactile Galactics will continue in this fashion. A wonderfully vivid press release claims the twelve track set “unleashes the lysergic choir of voices in Ruscha’s head against a dance grid, but makes sure it stays in soulful step.” It goes on to describe the album as “Secret Circuit’s most incomprehensibly detailed and stunning release to date” and Ruscha himself has also overseen the artistic direction of the album with typically colourful results.

Beats In Space will release Tactile Galactics by Secret Circuit across 2xLP, CD and digital formats on April 30. 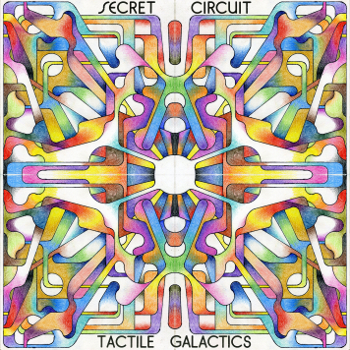