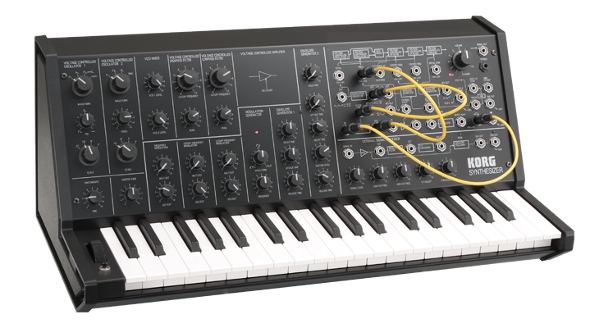 Korg have revealed the full details behind the previously rumoured miniature version of its classic MS-20 analogue synth.

For those unfamiliar, the MS-20 is one of the legendary pieces of electronic musical hardware; though not as ubiquitous as the Roland SH-101, as beefy in sound as the JUNO-60 or as desirable as a vintage Minimoog, the MS-20 stood out thanks to its versatile patch bay. Decomissioned in 1983, its renewed popularity has seen Korg create a new, miniaturised version which reproduces the original circuitry from 1978.

Although images of the unit leaked onto the internet a few days ago, Korg have now revealed the full specifications behind the unit, which looks to be as fully featured as MS-20 enthusiasts could hope for. Although contained in a case 86% of the original’s size, it looks to replicate all functionality of the original, including self-oscillating high-pass/low-pass filters with their distinctive distortion, the flexible patching system (albeit with 1/8″ minijacks) and even the original 1978 owner’s manual and settings chart, which explain in detail how to replicate different sounds. The only discernible difference from the original (apart from the size) is the addition of a USB-MIDI connector.

Korg have long had success with their miniaturised synth offerings; the microKORG has been a staple feature of their range since 2002, though that model offers only virtual analogue capabilities. Given the increasing popularity of smaller, more affordable analogue hardware from the likes of Moog and Dave Smith Instruments it was only a matter of time before Korg joined the fray; although their Monotron units have used analogue ribbons, they weren’t anywhere near as fully featured as to compete with the likes of the Mopho or Little Phatty. Those wishing to see the unit in action should check the video below.

Full specs can be viewed at the Korg website; pricing and release details have yet to be confirmed, though Create Digital Music suggest a price of $599.