Dusted Down: Pushé – Don’t Take Your Love Away 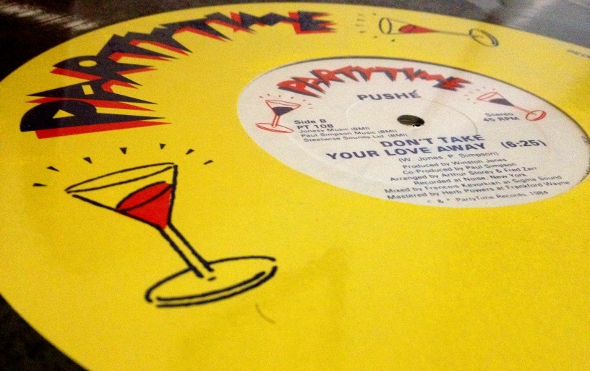 By 1984, a distinct “garage” sound was beginning to take shape in New York. Based around the dubbed-out, synth-heavy remixes of legendary Paradise Garage resident Larry Levan – particularly his reverb and delay-laden 1983 rubs of acts such as Imagination, Jeffrey Osbourne and Gwen Guthrie – the sound was slowly inching further away from straight-up disco and boogie and further towards what would later, in the hands of Tony Humphries and others, become garage (or, as it was known in the early years, “garage house”).

The journey was far from complete in 1984, however, but conditions were ripe for revolution; the staccato, edit-heavy rhythms of freestyle, the bass-heavy futurism of electro and the soulful, synth-heavy delights of boogie ruled uptown and downtown dancefloors. Aside from Levan, other remixers, editors and producers  – most notably Francois Kevorkian and Shep Pettibone – were playing around with the dancefloor potential of DJ-friendly dubs, utilizing reverb, delay and editing tricks that helped turn regular drum machine rhythms – particularly snares and handclaps – into sweaty, percussive builds. Some, such as Arthur Baker’s right hand man John Robie, were even exploring the potential of digital sampler technology (see Cuba Gooding’s 1983 Paradise Garage fave “Happiness Is Just Around The Bend”).

There was also a new breed of producers and musicians, free of the baggage that a long career in disco or boogie brought, beginning to make their mark. Two such producers were Paul Simpson and Winston Jones. They’d first worked together on “Use Me, Lose Me”, a 1982 Paradise Garage favourite credited to the Paul Simpson Connection. Released on Streetwise and now widely considered a post-disco classic, it successfully fused disco drums with what would later become garage staples, notably vibraphone solos, bold piano riffs and delay-laden vocals. The 12” also featured several floor-friendly alternative versions, including a Reprise and Dub; both still sound like an early blueprint for the mid-to-late ‘80s garage sound.

By 1984, Simpson and Jones had discovered a new love for synthesizers and drum machines. Presumably influenced by Levan’s production and DJ style, they began to push the boundaries of electrofunk, making their productions increasingly dubbed-out and reverb heavy. Their experimentation with drum machines and synthesizers would eventually lead to the creation of Serious Intention’s “You Don’t Know”, a benchmark in proto-garage – and some would argue, with justification, proto-house – production. First, though, there was another Simpson and Jones production, mixed by Francois K, that now sounds like the “missing link” between Levan’s ’83 productions and the sparse, late night garage dubs sound that would flourish in ’85 and ’86: Pushé’s “Don’t Take Your Love Away”.

The flipside dub, in particular, is near perfect; It bristles with hedonistic intent and features many aspects that would later become Simpson trademarks such as delay-laden synth chords and drum fills, Italo-influenced melodies, a bold but hypnotic synth bassline, reverb-heavy vocal samples and a spine-tingling bassline drop. The production and arrangement, assisted by Brooklyn studio regular Fred Zarr (whose synth-work can be heard on Paradise Garage staples by Cuba Gooding, Sugardaddy, Rockers Revenge and Madonna), twinkles, whilst somehow retaining enough space to allow the layered, effects-heavy synthesizers to make their mark. Even now, it sounds wonderfully futuristic, which is something that can’t be said for many similar records of the period.

It wasn’t long before Simpson had tailored the style of “Don’t Take Your Love Away” to become something of an aural trademark. His collaboration with Anthony Malloy later that year as Serious Intention set the benchmark. Less cluttered than Kevorkian’s mix of the Pushé record, and with fewer core elements (bassline, stabs, melody and a few snatches of vocal), it proved beyond doubt that stripped-back, groove-based electronic music was the way forward. In the years that followed, he produced a number of similarly sparse proto-garage jams, many of which – Simphonia’s “You & Me” and The Paul Simpson Connection’s “Treat Her Sweeter” – are formidably dubbed-out. Like “Don’t Go Away”, all could have been celebrated here. “Don’t Take Your Love Away”, though, is where it all began.