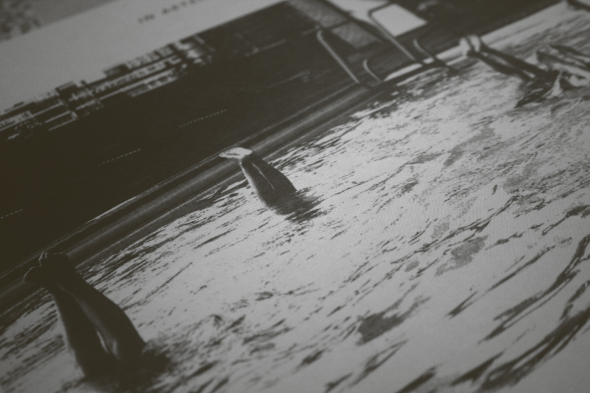 Although January is traditionally a time of record drought, we were greeted on our return from the festive season by a clutch of releases which slipped in at the end of the year that could easily have made our Best of 2012 lists.

Chief among them was the final release of the year from Detroit-based producer M GUN on Will Bankhead’s Trilogy Tapes imprint, and although the man otherwise known as Manuel Gonzales had already impressed us in 2012 with 12″s for Wild Oats and Don’t Be Afraid, The Near Future EP is possibly our favourite release from the producer yet. Those expecting the kind of raw Detroit techno he’s become known for will be all over tracks like the deep mid-tempo cosmics of “2”, the rippling percussion and growling bassline of “The Race” and the tracky Millsian jack of “Tiles”, but the real surprises come in the form of “Walk With Me”, an edit of what sounds like some dusty 60s psychedelia, and “Flutter’s Brother”, a track which sounds like a knackered, decayed old Green Velvet demo.  It’s another essential release from Bankhead’s imprint, and with TTT 008 already on the horizon with Anthony Naples at the helm, it looks as if 2013 may well be bigger than the last for the label.

Also slipping in with little fanfare was the final release of the year for Bill Kouligas’ PAN imprint. Revisiting one of the label’s best-loved releases of 2012 with a remix 12″ seems as fitting a way as any to end the year, but being PAN, the reworking of Heatsick’s Deviation from Mark Fell’s Sensate Focus moniker was as atypical as you could imagine. Although Fell has already used the persona to present his unique take on house music on a number of 12″s this year, applying digital synthesis techniques to achieve a hyper-clean yet soulful sound, the results of the brilliantly named Deviation Heat Treated are some of his best work, keeping the playful nature of the original’s cheap Casio production values and sharpening it up for adventurous dancefloors. Also landing was Lee Gamble’s second album of 2012, and one of our top 20 of the year, Dutch Tvashar Plumes. Although stylistically very different from the ambient soundscapes of Diversions 1994-1996, its processed techno sounds – which call to mind Actress – feels very much like a companion piece to Diversions, sounding like the abstract rhythmic shapes ripped out of its predecessor.

Fans of mechanical techno-not-techno sounds will be pleased to hear that Minimal Wave also came through with the latest transmission from 80s French underground heroes In Aeternam Vale on limited fluorescent yellow vinyl. La Piscine stylistically mirrors the previous two track release that Vasicka’s label put out which featured featuring the stunningly ahead of it’s time proto-techno monster “Highway Dark Veins”. The title track on this release is an equally brilliant synth-techno beast, while B-side “Calling Somewhere” sounds like a cold wave version of proto-halfstep. The fact that these tracks are 22 years old literally left us speechless. Meanwhile, Dominick Fernow continued the seemingly never-ending stream of Vatican Shadow material with the 3 LP It Stands To Conceal arriving on his own Hospital Productions, collecting three releases previously only available on tape and digitally: Jordanian Descent, Ghosts Of Chechnya and Atta’s Apartment Slated For Destruction, with the producer’s combination of noise and techno are darkly compelling as ever.

A similarly meaty box set came from Oneohtrix Point Never, whose 5 LP Rifts box set released on his Software label collected a treasure trove of material; his early albums Betrayed In The Octagon, Russian Mind and Zones Without People all see their first vinyl release, while a number of unreleased tracks also see the light of day, making it the ultimate item for completists of the artist’s early Juno-60 ambient drone experiments.

Hippos In Tanks also released the vinyl versions of James Ferraro’s Sushi, an album which sees him providing his own typically skewed take on R&B and house, and Hype Williams man Dean Blunt’s excellent solo mixtape The Narcissist II.  Unfurling like one long weed-induced fantasy, The Narcissist II is a combination of unsettling instrumentals and bizarrely serene downtempo lounge-pop, acting as a kind of companion piece to the Hyperdub released collaboration with Inga Copeland, Black Is Beautiful; where that album was defined by Copeland’s feminine vocal presence, this EP acts as its unexpectedly sensitive, masculine reflection.

Finally, Broadcast’s final work before the tragic passing of Trish Keenan in 2011 saw release this week; the soundtrack for Peter Strickland’s Italian horror themed thriller flick, Berberian Sound Studio, a film about a  “British sound recordist’s slowly degenerating mental state while working in an Italian film studio”. Little the duo have created has been as explicitly cinematic and emotion-rich, or as shot through with near-crippling tension. Blending their child-like electronic melodies with dark moods, vintage synthesizers, chilling effects and traditional horror soundtrack elements (both Hammer and Giallo), Berberian Sound Studio, released on their regular home of Warp, is nothing less than a triumph.