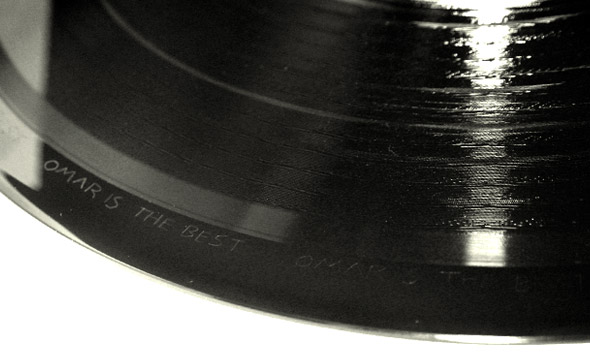 The end of year list making season might have begun in earnest but that doesn’t mean there was any easing down when it came to the releasing of records.

In fact several end of year contenders arrived this week, with Bristolian Kahn dropping two worthy slabs on the Deep Medi imprint and the newly formed Hotline. If your finger resides close to the beating pulse of what’s hot then both records should be familiar to your sensory perceptors, with Dread a killer debut on Mala’s label for McGann, retaining the classicist approach to dubstep that remained a hallmark of Deep Medi while evoking early jungle by the usage of growling, spitting vocal sample from an uncredited ragga MC. And then there is Backchat, Kahn’s latest guttural grip on grime and bashy dancehall with regular co-conspirator Neek that was preceded by an amusing and refreshing release campaign which complemented the music perfectly – in-depth reviews of both records went up elsewhere on this site this week so check those for the full run down instead of relying on these hungover words.

Wonder what a smoother side to Rene Pawlowitz might sound like? Check the Zigg Gonzaless 12″ Music which brandishes the sweltering quasi deep house bomb that is the Belgian-Balearic title track as well as the expected ferocious bewilderment in the form of a Head High remix of “Penny Pincher”. There was a serious smack down of killer techno accompanying this week too; Dettmann graced the Ostgut operation with his first slab of Berghain testers in a year, Horizontal Ground paired Skirt with The Black Dog and the affiliated Frozen Border welcomed Joe Cocherell back for some no nonsense techno. Waves from the past were present in the shape of Soul Capsule’s classic Overcome and Poindexter’s Computer Madness which were reissued in Trelik and Thema shaped form respectively – the latter with a pair of fine remixes from messrs Sydenham and Function. Add to this recommended pile the first release from AnD on their own label, another hand stamped thumper from the Appointment camp, more Heckle tackle for Tabernacle (try saying that three times in a row) and four tracks of rave techno madness from EDMX on the Shipwrec label.

“Omar S Is The Best” and “Detroit Is Here To Stay” were the amusing scribblings etched around the edges of both sides of the latest FXHE 12″ with Omar himself back at the controls for Triangulum Australe which ensured the label ended 2012 in same unpredictable yet brilliant form that they began the year. Serious lunar house vibes on the title track as you’d expect, while face down “Mayall II” was a tumbling delight, opening up from the round, bass heavy toms into a procession of unashamedly gripping and vivid chords. Let the needle roll out for those bizarre sketches housed just before the runout groove too.

Aside from this, house music was represented with even healthier zeal than the aforementioned techno with Parris Mitchell’s classic All Night Long getting a remix (replete with remixes from the track’s biggest fan Bok Bok), Mike The Teacher Huckaby charting the continual progression of his SYNTH label with The Versatility EP, Cottam drawing out more sumptuous deepness for the Aus imprint, San Laurentino adding Let’s Play House to his label roll call, Rush Hour slipping out a 12″ hint that they’re going to be serving up a Muzic Box retrospective next year as well as enlisting Andres and Oliverwho Factory to remix Recloose, Auntie Flo surfacing on Mule with some Ritualistic house and Inkswel banging out some boogie-fried Unthank business.

Though listening to the Love Cult album with a cheap red wine hangover is not recommended  the immersive irradiated qualities of Fingers Crossed impress in more sober situations, ensuring the Russian duo’s stunning debut album marks another excellent release from the Public Information label, while our favourite numerically named Swede 1991 continued to impress, remixing the canine endeavours of Lukid into something almost Detroitian in conception. Spectrum Spools seem to be matching the release schedule of daddy label Editions Mego record for record this year, and the 164th release to brandish a SP cat no saw Container pushing the limits with startling results.

Meanwhile, over at Juno Download, Hemlock’s exhaustive Chapter One chronicle extended into the digital domain: in addition to last week’s vinyl and CD releases, Untold’s label also put out six separate digital releases of varying hues. Our pick of the bunch was the collection of label highlights and unreleased exclusives which came backed with a mix from the boss man Jack Dunning – peep it here. On the digital album front Finnish producer Sasu Ripatti aka Vladislav Delay delivered one of his most accessible but satisfying albums to date in Kuopio. The considerably less seasoned but no less exciting Gerry Read released his debut album, Jummy, a heady and frantic melange of stunning percussive rolls, mashed up scat singing and fractured piano stabs, and yet another layer of misdirection was added to the mystery of Hype Williams with the official release of The Narcissist II, a combination of unsettling instrumentals and bizarrely serene downtempo lounge-pop from one half of the duo, Dean Blunt.

But perhaps the best album of all to surface this week came from Madteo, who put out his Noi No opus via Finnish purveyors of leftfield electronics, Sahko. For the most part the album adopted a beatless approach, with tracks like “Rut-A-Round” combining sludgy drones with serene chords, while “Gory Glory” feelt like a house track with the beats missing. Somewhere between sepia-tinted deep house and glacial glitch, Noi No sounded like nothing else released this year. The pick of the digi singles came from Beneath, who took his unique strain of dark UK funky to Martin Clark’s Keysound imprint, while Breakin’ boss Ed ‘DMX’ Upton returned to the MPC Trax series with a four-tracker for those who like their techno hard, heavy and uncompromising, and Ossie returned to Hyperdub with two slices of neo-soul goodness.

On the CD shelves this week we couldn’t help but adore the latest release on excellent Italian imprint Mannequin, who released Breathless, a full length album from Italian cantante Valentina Fanigliulo. While there were moments of dark Italo (see “Let Me Go”) and murky synth-wave (“I Don’t Care”), Fanigliulo’s offering was attractively melancholic electronic shoegaze – all creeping synth washes, long chords and drifting vocals. While she did occasionally sound like Kate Bush trapped in a cupboard thanks to the various production effects employed, for the most part Breathless was intensely beautiful in its own mournful way. Her hero, A.R Kane, would be proud.