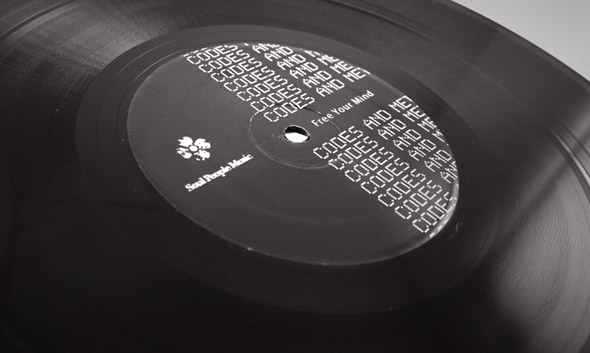 Fred P is becoming an ever more prominent force in deep house, widely recognised for his austere approach that shrugs off the automatic tendency towards physicality in dance music, letting it play second fiddle to the more psychologically-focused power that can be summoned from music on a wider scale. There’s a reason that he called his label Soul People Music, and in the trademark pads and chords that have come to define his music, Fred has managed to capture the same uplifting spirit that has embodied black music since the earliest days; an emancipating resistance sound as much about spiritual fulfillment as it is about fighting back.

There’s not a huge distance between his Black Jazz Consortium guise and the Fred P material. At times the BJC music can seem a little tougher, with more prominent percussion amongst the blue note keys, but this release marks something of a diversion for Fred as he embraces the cooing vocals on Minako on lead track “Free Your Mind”. It’s a sumptuous track, all fluttering and delicate bongos, warm Rhodes bass and a set of strings that hover in the background creating the melancholy amongst the warmth. Minako’s vocals meld into this healing brew as smoothly as the distant delayed and reverbed sound effects, albeit with lyrics that hardly set new standards in poetry. It’s not the first time that Fred has worked with vocals, but it’s not often that he does.

There’s no denying there’s something ultimately loungey about Fred P’s music. It could just as easily slip into the background of a cocktail bar as it could warm up the right kind of dancefloor. In many ways though, it’s music best enjoyed in an intimate setting when the need for something soothing grabs you. “Science & Art” continues this theme, drifting on a minimal broken beat while a virtuous piano solos with abandon in the ambient ether.

“Kleem” appears at first to take a tougher stance, kicking off on a raw drum track and scattered FX that seems positively cold by comparison with most of Fred’s output. However those quintessential pads come in halfway through, sounding all the richer for the pleasure delay brought about by the elongated intro. Once again a vocal comes through, although it’s not clear if it’s Minako’s or not, and in this context the token drop sounds a little less necessary.

That leaves it to Simbad to deliver his remix of “Free Your Mind” as a means of rounding off the EP. He pitches down Minako’s vocal and adds a joyous garage bump to the rhythm, but the real switch up comes from the effervescent arpeggio that darts and parrys through the track. With a cheeky digi-bass breakdown and rising crescendos, there’s much more dynamism at work even if the finished result lacks the finesse that defines Fred’s music. There will always be those left a little cold by house music this restrained, and there’s times when it just won’t work, but with the right set of ears in the right environment, the emotional reach of Fred P’s music can’t be argued with.