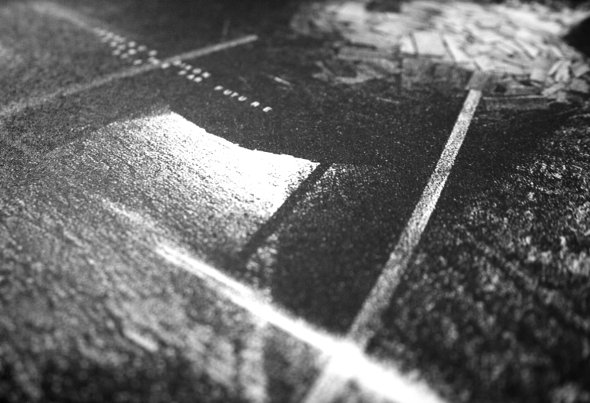 Anyone with a firm grasp of the law of averages would understand that in a month where there was far too many good records, a fair proportion also came wrapped in excellent sleeve art.

Some usual suspects in this month’s column, with Minimal Wave perhaps playing dirty and laying down no less than four plushy presented releases (as well as a timely reissue), and it was their 12″ offering of tracks from Lyon duo Deux that resonated most brightly with our sensory receptors. Little more than a simple black and white shot of Gérard Pelletier and Cati Tete indulging their craving for a cigarette, the cover perfectly captures the coldness of their sound. Close allies of Minimal Wave, Italian label Mannequin were also active with two sumptuous looking releases in October, dropping a new Mushy 12″ and the holy grail of minimal synth reissues in Sam Rosenthal’s Tanzmusik, which were both as visually eye catching as they were enjoyable to sink into.

Modern Love’s reputation for striking (and occasionally scary) cover art is both well known and well deserving. Ihe image adorning Luxury Problems, Andy Stott’s new LP, is undoubtedly up their with their finest work, with the producer himself recently proclaiming to Pitchfork that it’s a perfect representation of the music within. As impressive as that perfectly controlled dive looks on a computer screen or your iPhone, it’s magnified ten fold when you’ve got a twelve inch shaped gatefold sleeve in your hands. You could hardly fail to notice the sleeve art for Pro Style, Pete Swanson’s three pronged melding of sonic noise and techno which came housed in a deliciously saucy retro sleeve depicting a wedge of Chippendales doing their thing, which contrasted nicely with the pink vinyl.

Rush Hour’s design department got it 100 per cent right on their Elbee Bad reissue, using a tone of yellow just the right side of lurid as a backdrop to the ruff fontage evocative of the many flyers you’d come across in the early 90s era of New York house music. A second Rush Hour release whose cover art caught our eye this month was Xosar’s second for the label which like the first was overseen by the Ghost Haus exponent herself. Another reissue of note meanwhile came from Steve Kotey and Loud-E, who presented an illuminating retrospective of material from Dieter Kolb, Franz Aumuller and Franz Knuttel, three German musicians more widely known collectively for their work as Supersempfft and Roboterwerke, which arrived with a detailed design on the front and excellent sleeve notes on the back.

On the debut release on the newly inaugurated Mira label, Shifted and Ventress chose to adopt a different stylistic approach to clean, distinct edges of cardboard inserts and clear sleeves that accompany their Avian output, electing for soft focus imagery of what looks like some hooded cult bearing a coffin which in truth seems quite apt for the decidedly numb brand of techno from the mysterious Bleaching Agent.

Spencer Hickman is a self-confessed goth with a predilection for horror films, so you can imagine his (and our) excitement at the re-release of two seminal Carpenter/Howarth scores on his Death Waltz imprint to coincide with this year’s Halloween festivities. The Jay Shaw art for Halloween III is deserving of note, but it’s Brandon Schaefer effort for II that makes it into our list with some frankly terrifying imagery. Equally cinematic were the two 17-minute plus pieces by Jamal Moss aka Hieroglyphic Being that appeared on the Le Jardin Des Chemins Bifurquants 12″, reissued in October by audioMER. The artwork,  provided by Hair Police’s Robert Beatty, is seemingly a visual interpretation of the concept Moss explored on both “Rhythmes Circadiens” and “The Garden Of Forking Paths”; namely the possibility of a form of worship unique to plant life.

Elsewhere, we were taken with the striking simplicity of the hologram cover of 110% Silk affiliate Strategy’s album for Peak Oil, and there were a couple more beautifully designed LPs this month; first, the smeared graffiti of Secret Circuit’s Tropical Psychedelics opus, and second Terrence Dixon’s From The Far Future 2, which was housed in a charred, oily and coldly mechanical looking sleeve.