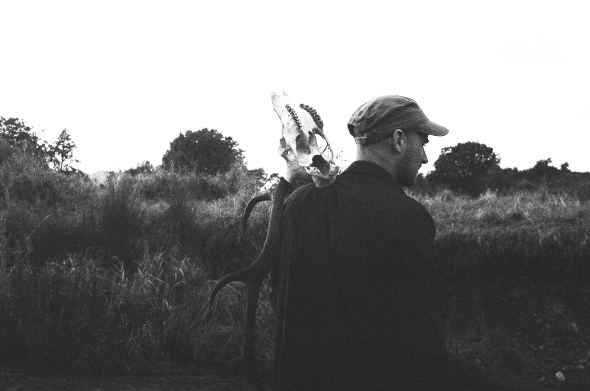 Bristol hub Black Acre round off a strong year with Zenith, a second release on the label from elusive Scottish producer Loops Haunt.

Pictured above innocently rambling the hills outside Dundee with a deer skull for company, Loops Haunt is a producer notable for a sound sometimes so intense it could feasibly shred your cerebral cortex like pancetta. He first surfaced in 2010 with the glitch-step Rubber Sun Grenade EP for Glaswegian imprint Fortified Audio before making a impressive statement with the sonically captivating Ark, a three track debut for Black Acre last year which, according to the Bristol label, took the best part of a year for the producer to complete.

His return to Black Acre marks a strong year for the imprint, following EPs from Fantastic Mr Fox, Hyetal, Dark Sky and Blue Daisy – the latter being a particularly distinctive release. At seven tracks long, Zenith is undoubtedly the most ambitious release from Loops Haunt yet, sitting in the crawl space between EP and album with the shortness of productions nudging it towards the former. Typically broad in style, the title track is undoubtedly the centrepiece here, a kind of Martian attempt at drum & bass, something that continues on the hyper edited amens of the unpronounceable “dltfaypily”. Around this Loops Haunt crafts shorter largely instrumental hip-hop arrangements that utilise all manner of found sounds.

Black Acre will release Zenith by Loops Haunt on December 3.