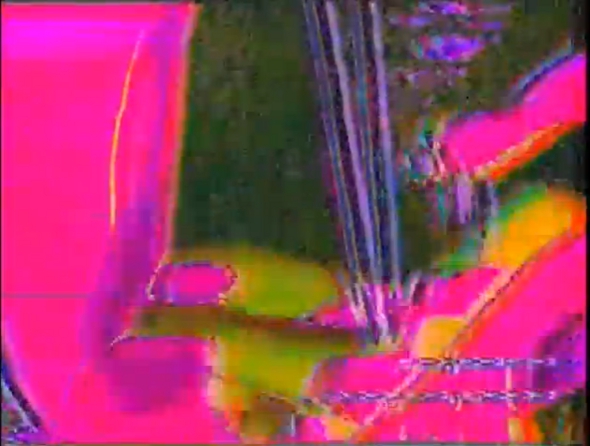 The latest emission from L.I.E.S. HQ has its own video – a grainy bondage movie directed by Juan Bocca and Oliver Vereker.

The 14 minute clip was apparently shot in the pair’s apartment, and depicts wilful human pain set to the soundtrack of decaying synths, spectral arpeggios and drum patterns that’s been branded with typical aplomb by the label as ‘Warfare Electronics’. Two Dogs In A House is the ongoing collaborative project between Jason Letkiewicz (aka Steve Summers, Alan Hurst & more) and label boss Ron Morelli, with “Eliminator” set to appear on the forthcoming LIES 016 12-inch, which will apparently surface this week.

L.I.E.S. fans will also be pleased to note that the keenly awaited Hassan LP from Jorge Velez – which looked destined to become a great album that never was – will finally see release in the coming weeks after a series of pressing plant-related delays. The equally delayed Panther Moderns 12-inch from Steve Moore is also set for imminent release.

This Friday night Morelli will be in London to headline the Juno Plus third birthday party, which takes place at The Waiting Room in Stoke Newington. A limited number of advance tickets are still available – pick them up here.