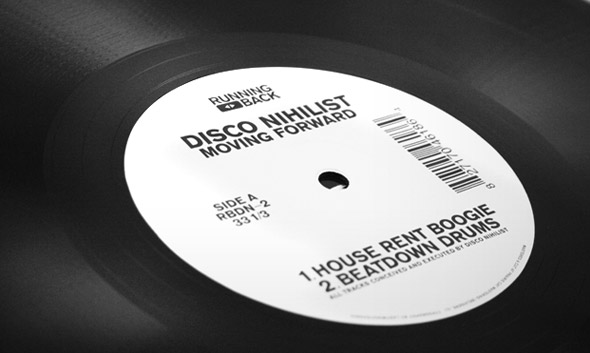 Mike Taylor has consistently impressed with his particular brand of linear analogue groovery, first making his name with a series of scratchy, full-blooded releases that pushed 808-revivalism and hardware fetishism to its very limits. Each of his releases to date, whether for Construction Paper or Running Back, has been a kind of hymn to old-fashioned music making. His obsession with little details – transferring tracks to cassette before getting them mastered, recording drum machines and sequencers wobbling away in wonky analogue symmetry – suggests an obsession with style over substance. Given that his releases are rarely less than excellent, it’s a hollow accusation.

Nevertheless, Moving Forward, his second EP for the consistently excellent Running Back imprint, sees him flip the script slightly. Whereas many of his earlier works focused on stark, alien rhythms and the ragged variations of 303 acid lines, Moving Forward is driven just as much by melody as the percussive potential of vintage drum machines. Of course, there was always some attention paid to mood and melody in Taylor’s work, it’s just that it wasn’t the most obvious feature. Now he’s made it a talking point.

The EP’s opening track, “House Rent Boogie”, sets the tone. Bold and in your face, it gains most of its power from using the central melodic hook both as a heavy synth bassline and, several octaves higher, the chiming main riff. It’s an old track, but it ensures that “House Rent Boogie” has a relentless energy that drives the track forward. There’s a nice, woozy middle eight and some thunderous drum machine rhythms, too, but these merely serve to accentuate Taylor’s central theme. It’s easily has most formidable track to date, certainly in terms of its singular pursuit of dancefloor thrills.

“Film Grain” is, if anything, even more melodically adventurous. It uses many of the same tricks – the double-tracked bassline/melody being the starting point – but develops them further. Whereas “House Rent Boogie” is all power, “Film Grain” has far more poise. There are darting synth strings, deliciously upbeat chords and the sort of warm, chiming synthesizer riffs that send shivers down the spine. If the EP opener is relentlessly driving, this is loose and sprightly. You’ll want to dance, but you’ll be glancing skywards rather than staring at your feet.

Regular listeners will be pleased to know that Taylor hasn’t completely abandoned his machinist principles. The EP’s remaining two tracks, “Operator Select” and, in particular, “Beatdown Drums”, are amongst the most stark and industrial things he’s yet committed to wax. The latter is, as the title suggests, a simple but devastatingly effective exercise in drum machine percussion. “Operator Select”, meanwhile, is as intense an acid track as you’re likely to hear all year. It’s not all that fast, but it’s certainly creepy. It may not give you nightmares, but it sounds like it should. It’s hard to say whether Moving Forward is Mike Taylor’s best Disco Nihilist release to date. It’s a special EP, featuring his most finely crafted and melodically advanced tracks so far. It’s perhaps not as breathlessly exciting as the raw machine tracks showcased on his early releases, but it’s far more fulfilling. Either way, it’s another special release from a very special talent.