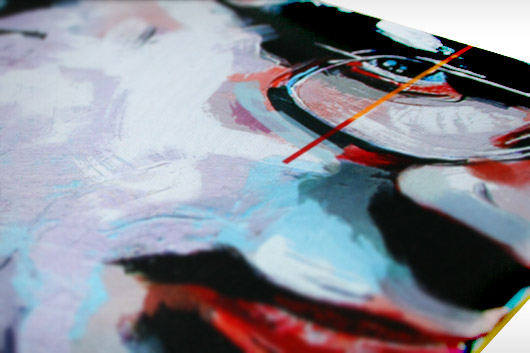 There’s been no denying of the rapid and rambunctious rise of Ekoplekz, as in two years he has leapt from noted blogger to celebrated sound terrorist by all and sundry (who might have shunned his abrasive analogue ruminations mere months before). His Discogs page strains under the weight of his output in a way that would reflect someone who has been making music as long as he has (operating since 1988 it would seem), but there’s barely a dot on the official release radar before 2010.

Bar a 12” as Patchwerk Man which this writer can unfortunately shed no light on, the only dot to be found is a cassette-only release from 1994 (back when that was a money-saver rather than an aesthetic power move) under the nom-de-plume of Nick Edwards. It’s taken 18 years for Edwards to feel compelled to return to his own moniker, and perhaps it denotes an interesting juncture for the propulsion of his recent production career.

The cover of Plekzationz seems equally poignant as a Bacon-esque oil impression (either digitally simulated or genuine) shows the man himself in stark portraiture, so one can’t help but feel that there is a meaning behind this step out from the shadows of the Ekoplekz mythology. The four pieces contained within are as gritty as anything we’ve heard from the man thus far, but “Chance Meets Causality Uptown” in particular snaps your ears into a sharp focus as the positively earthly remains of a bass guitar reaches through the void of drone and pulse. It only serves to bolster the Bristolian post punk vibe that has always permeated the ‘Plekz material, but its inclusion can only be stark in the context of its creator.

Elsewhere, the music serves as a steady continuation of the sound that Edwards has been serving us with since his (re)emergence. Editions Mego is of course a natural habitat for such uncompromising tones; shapeless and difficult but utterly beguiling. Whether this release was aimed as a summary for new listeners, a marker for a change in tact or simply another transmission, the same principles of structure-less expression apply and another fine excursion in nail-scraping sound design has come out of it.

1. Chance Meets Casuality Uptown
2. (No) Escape From ’79
3. Inside The Analog Continuum
4. A Pedant’s Progress