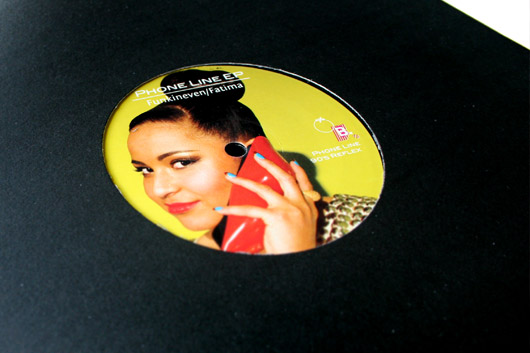 “Good things come to those who wait” is one of the more annoying platitudes that people like to roll out, though it rang true this week as Eglo FINALLY released Phoneline from Fatima & Funkineven.

Deserving of a number one spot in charts across the globe, we’ve been scheming for “Phone Line” to drop ever since our favourite Eglozoid dropped the track on his Boiler Room session last November. Such is our eagerness to grip the track on wax, we’d have been happy if Eglo released “Phoneline” as a one track 12″ but the F & F Music Factory show the full flex of their talents on the tracks that accompany it. “90s” is all satin dipped RnB in the vein of the great TLC whilst “East To West” sounds like what would happen if Dam Funk got in the studio with Maurice Fulton.

Not content with reissuing a triple CD package of his most essential work, this week saw UK techno icon Regis dig out some raw turn-of-the-century material for a double 12″ reissue compilation called Death Head Said. There is much to explore here, with “Absolute” sounding like some kind of tortured, beastly proto French House track, while the beat on “Baptism” seems in a perpetual state of falling over itself. If this has wet your techno whistle then Rivet’s debut on Skudge Records will probably get you all excited too, with the title track “Grifter” dovetailing nicely from its chunky 4/4 begginings into a vicious electro bassline filled with crispy jungle break samples. Its flipside accompaniment “Sundry” also makes overt references to the jungle era and collectively they form another smart release from all involved.

The Bird Scarer imprint served up their second helping of limited vinyl goodness this week with Scott Fraser’s excellent ten minute low slung machine funker “A Life Of Silence” arriving on the format it deserves after debuting on Mr Weatherall’s recent Masterpiece triple hitter CD for Ministy of Sound. Timothy J Fairplay kept up his 100% appearance record for Bird Scarer with a superb self styled “Fall Of Shame” remix, which straddles down a jagged guitar riff that recalls his stint in Battant, while teasing out the melodic subtleties with excellent results. Speaking of Fairplay, check the B Side on the latest Mixed Fortunes 12″ from Rory Phillips which veers down a similarly OST indebted stylistic path as Weatherall’s studio hand while stamping his own rhythmic punk funk sensibility on the sound.

100% Silk came through with our favourite release from the stable in a while as Ital and Magic Touch engaged in some musical back scratching antics with excellent results. The Mi Ami duo each contributed an original track as well as a remix of each other with Magic Touch’s ecstasy filled Hi NRG disco remix of Ital’s box jam “From A Dream” a real highlight. You should probably inspect the latest Tusk Wax release from Bristolian JockTalk if you like dust laden boogie and the ESP Institute debut of Melbourne producer Michael Ozone whose melding of Giallo horror and New Beat is wholly unique and needs to be heard.

Public Information continued their survey of the outer fringes of avant-garde electronics with Cruise Forever, the debut solo release from Austin Cesear which was undoubtedly our album of the week. Even in terms of America’s rich underground of contemporary producers, the San Francisco based Cesear seems like an outsider; where his contemporaries are content to rework well worn tropes into bright retro pastiche, Cesear’s music is warped and decayed, existing in a dark, parallel version of Chicago and Detroit’s musical past.

Over at Juno Download, it was good to see Terrence Brian Farley, grizzled old house hero, back in the studio. He teamed up with Disco Bloodbath man Dan Beaumant for “Fire”, a track that brings back memories of his halcyon days with previous partner in crime Pete Heller. Elsewhere, Hans-Peter Lindstrom returned, with little fanfare, to the business of releasing music. Both “Ra-Ako-St” and “Ed-Ged-Osis” are typical Lindstrom; delightfully melodic, with an air of space disco pomposity, propelled forwards by the sort of dynamic, appregiated synthesizer lines that have become his trademark. Both tracks are delivered in extended edit form, with old pal Todd Terje providing the razor-sharp scalpel work.

This week also saw teasers for two albums we’re getting quite excited about, from Teengirl Fantasy and Terror Danjah. Danjah pulled no punches on “Dark Crawler”, which found him taking the tension of grimey strings to a new level. With a 70-strong orchestral swagger behind it, the panicked stabs take on a blockbuster scale which only serves to hype up Riko’s rootsy flow to a nail-biting, cliffhanging, car-chasing showdown of a track. And Logan Takahashi and Nicholas Weiss – better known as Tenngirl Fantasy – returned to R&S with a digital-only single preceding their hotly anticipated second album. “EFX” is a curious but heartwarming cut, built around a woozy vocal and super-sweet, oh-so-melodic darting synths (very late ’80s), it somehow gets by with only a whisper of percussion.

Rounding off the week’s best digital release were Agaric’s forays into experimental techno for Swedish label Kontra, a remix package of The Field featuring Junior Boys, Blondes and Mohn, and a smoking EP from Hot City, who dropped back into the action with monster-jack of lead-tune “Buggin’ Out” – which mixed Todd Terry snares, crazed hats chopped club vocals and descending basslines.

On the CD front it was all about 122BPM, the new compilation from Still Music curated by label boss Jerome Derradji. It focuses on the output of two long forgotten Chicago labels, Mitchbal and Chicago Connection Records, during the early to mid 1980s, when electro, new wave and boogie were morphing into house. As such, 122 BPM offers a mix of rare, largely overlooked cuts that bristle with analogue dancefloor intent.