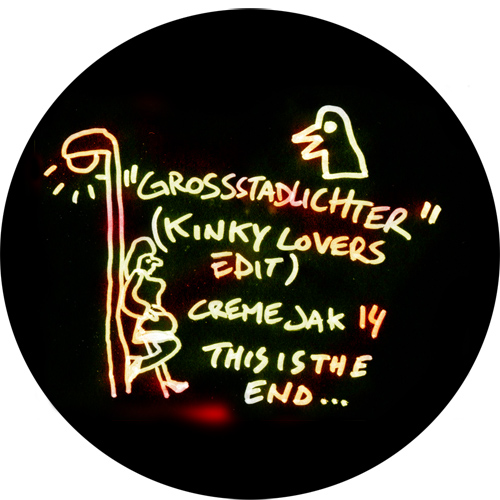 Dutch imprint Crème Organization is bringing down the curtain on its JAK series, with the 14th and final instalment coming in the shape of an epic German disco edit from Kinky Lovers.

The series, which launched in 2007, has generally maintained a focus on the more visceral end of the house music spectrum, with producers seemingly given the remit to thrash their 808s to within an inch of their lives. The 13 previous editions, all released on limited edition vinyl, have seen releases from a host of respected producers including Jamal Moss, D’Marc Cantu, James T Cotton and Danny Wolfers aka Legowelt (with the one and only release under is Jackmaster Corky alias). There was also an uncredited edit of obscure 80s synth act Angel Shock and one release from an unknown producer simply and uncompromisingly known as “The Jak”.

A Crème press release stated that “there’s not much to add to this concept, and over the past few years this kinda musick has found the foothold it lacked when we started this lil’ enterprise in the heydayz of beige vanilla Minimal”. The final release sees rarely seen German duo Kinky Lovers edit Juliane Werding’s 1980 pop rock number “Grossstadtlichter”, which itself was a cover of Jon English’s “Hollywood Seven”. Perhaps unsurprisingly, the track goes against the grain of most past JAK releases, largely eschewing the grubby underground house sound, also known as jakbeat, the series is known for.

Crème Organization will release “Grossstadtlichter” (Kinky Lovers edit) in a one-off vinyl pressing of 250 in late August – in the meantime you can grab a free download of Crème chief DJ TLR self styled Detroit Screw take on the Orgue Electronique and Robert Owens track “Our House” via the Soundcloud player below.