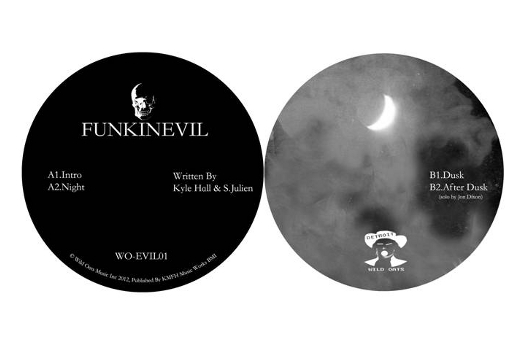 Wild Oats will release Night/Dusk, a collaborative release between Kyle Hall and Funkineven under the Funkinevil banner later this month.

There’s been whispers regarding the prospect of Wild Oats boss Hall and our favourite Eglozoid working together for some time, which were confirmed when Funkineven recently shared a short video of the duo’s material getting mastered from analogue tape.

Described as “super raw serious synthesizer machine soul mastered from warm Reel to Reel tape to Detroit Virgin Vinyl,” the forthcoming four track 12″ sounds pretty much like what you would expect from a collaboration between the London and Detroit producers with “Night” continuing the stylistic lineage of Funkineven’s debut release on his Apron label. The Funkinevil releases get further Detroit points for tasking John Dixon of Underground Resistance act Timeline to provide some keyboard solo on the track “After Dusk.”

Now Eglo just need to get around to releasing “Phoneline” – that song of the year contender from Funkineven and Fatima that’s been burning a hole in our expectations since the end of 2011!

Wild Oats will release Night/Dusk by Funkinevil later this month on 12″ vinyl.