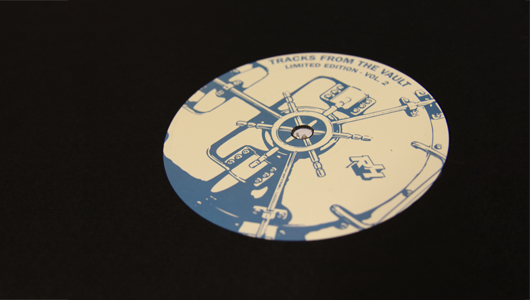 In a week where we invited our readers to peek into the gloomy East London studio bunker of a certain Mr Andrew Weatherall, the first release on his newly minted Bird Scarer imprint from Timothy J Fairplay arrived in limited quantities and promptly disappeared across the globe in square cardboard envelopes.

Props to those who managed to grab a copy of The Final Reel which has the rising Fairplay on quite epic form, trawling through eleven minutes of mind bendingly slow Carpenter meets Tangerine Dream analogue dirge, complemented by a shorter ALFOS ready remix from his pal, the self confessed Luddite Andrew Weatherall.  Surpassing Bird Scarer in the selling out promptly stakes was Dun Dun, Joy Orbison and Boddika’s latest genre-mashing pair of bangers to arrive on their Sunklowun imprint, with the onomatopaeic title track given its name from the piano stabs that drop down like a bag of bricks.

This is probably getting frustrating for you, reading about these records that won’t be available to form your own opinion, so we shall transgress onto Mix Mup. So far this year we’ve been treated to a multitude of excellent music from this producer in tow with his more celebrated friend Kassem Mosse (The Bosse), such as that sort of LP on The Trilogy Tapes and their slouching revision of Mistakes Are OK. The chance to catch up on what Mix Mup is like solo was afforded via a return to the Mikrodisko label for Drive By, a superb four tracker of gloopy low end house music seeping with industrialised atmospherics.

Our favourite Italian Marcelo Napoletano ushered in a new recording era with the foundation of a fresh record label in the shape of Fottute Registrazioni, manning the first release himself under the IFM project he shares with cohort Fran Mela for Day One, a 12″ of demented and disjointed house music in the tradition of Mathematics. On a par with this, Wbeeza dropped another classy two tracker for Third Ear further strengthening his title as one of the UK’s most underrated producers, maxing out on heads down techno with “Peckham Fly” then showing some KDJ-esque poise with sampledelica on the delightfully ripe summer business of “Billy Green Is Dead”.

The ever excellent Crème Organization dropped their latest effort, with WT Records graduate Alex Israel at the helm for a quartet of productions that fully justify the label’s description as “Chicago’s own overlord of deranged deep house”. Head straight for “Habituation Micturation” which has recent JP Podcaster Kevin Reynolds on talk box duties berating a crackhead for soiling his garden fence over one of those effortlessly effervescent Motor City productions. Whilst we are discussing Dutch labels, Dekmantel released the stunning eponymously titled album from Vedomir, while the good ship Rush Hour dipped into their archives and reissued that classic Actress remix of Thomas Trago along with an unreleased Convexation take on Terrence Dixon’s “Rush Hour” for the second release in their Tracks From The Vaults series.

At Juno Download we saw the arrival of the fifth Lone album courtesy of R&S: If you ever needed an album that felt like wide-eyed, innocent joy, we suggest Galaxy Gardenwould be an excellent place to start. Every track reeks of originality, whether it be the surprising track structures, the superbly detailed production, even the evocative imagery that the music conjures up. Of equal interest was the reissued debut album from Twitter’s finest, Zomby.  Previously released on Actress’ Werk Discs in 2008, this now seminal album was back this week via the producer’s freshly minted Cult Music. Four years since its release it’s still a peerless album – if you’ve yet to familiarise yourself with the world of Zomby, this album is no less than essential.

Three more albums arrived at JD towers this week and would have been filed under the genre “must-check” if such a thing existed: Distal’s Civilization crash landed on Tectonic in a myriad of electronic styles all thoroughly typical of the plucky Atlantan, while Ralph “Bass Clef” Cumbers dropped the excellent Reeling Skullways on Punch Drunk and the aforementioned Vedomir album arrived on Amsterdam-based label Dekmantel.

After causing quite a stir in 2010 with his emergent take on downtempo electronic pop, ooOoO returned to Tri Angle with a new EP that indulged his penchant for the romantic paranoia of trip hop realised through more prominent electronica instead of samples. Continuing to bait overly serious dance music with unashamed rave fodder, Unknown To The Unknown enlisted a couple of rough and ready remixers to take DJ Haus’ “Needin U” into further realms of large, namely R1 Ryders and the ever excellent Photonz.

Meanwhile Rene Pawlowitz took the name from his most recent album and went back in time once again. Every one of Pawlowitz’s projects succeed in providing a contemporary spin on classic sounds and styles – and The Traveller is no exception. Other digital niceness this week came from Prime Numbers (Dettmann remixing Trus’me), Still Going (with a debut cut on the New York imprint from the label bosses), Minimal Wave (collection of tracks from mid 80s UK synth act Hard Corps), Idle Hands (more stripped back missives from Kowton), and Creme Organisation with the seriously nerdy Starfighter EP from Jagdstaffel 66.

Our pick of the CDs this week was Last Step’s Sleep, reportedly the result of Aaron Funk working on the fringes of his own consciousness at the time when all he really wants to do is have a kip. Stylistically, the Last Step approach is one of vintage braindance, with warm analogue synths giving off mournful and intricate melodies, while lashings of expressive acid complement them.