To the casual observer of Minimal Wave operations, it might seem odd for the Brooklyn label’s lesser spotted offshoot Cititrax to be releasing the new album from Innergaze aka Jason Letkiewicz and his girlfriend, the audio-visual artist Aurora Halal – or indeed, any music of the new variety. Cititrax was seemingly borne out of Veronica Vasicka’s desire to give a proper platform for obscure 80s sounds which didn’t necessarily correlate with the Minimal Wave aesthetic – as on the Italo disco of Sylvi Foster’s If You Are and the 1984 proto Chicago house of Dance Party Album from Z Factor. However the label has dipped their toes in contemporary music, a fact possibly overlooked at first glance thanks to the resolutely authentic 80s neon hue of Medio Mutante’s Inestable.

Add to this the more recent Lonely Streets Remixes 12” that saw Chris Carter, Prince Language, Tom Furse of The Horrors fame and Complexxion remix Futurisk, short lived Miami based electro-punk act, and it’s clear Vasicka was no slouch at identifying producers capable of capturing a contemporary take on a sound she clearly admires a great deal. From this perspective then, Mutual Dreaming is a perfect fit to continue the Cititrax journey, drawing upon Letkiewicz and Halal’s multitude of influences as well as their own obvious chemistry.

Stylistically, the album comes across as a more fully formed and bolder progression in sound from the duo’s rugged debut LP We Are Strange Loops. Released back in 2010, that six track album was the physical culmination of the first few jam sessions between the duo after they had crossed paths in New York City while Letkiewicz was dog sitting for one of the producers of Natural Born Killers, as he revealed in discussion with this site earlier this year (we should perhaps be thankful for the canine population of the US as it was his dog-walking endeavours that paid for some of the analogue gear that powers Letkiewicz’s music). 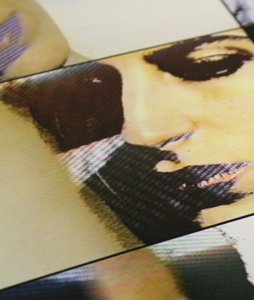 Given the circumstances, it is quite natural that there was a certain naivety to the music on We Are Strange Loops, and Innergaze seem in much more confident mood on the follow up. Letkiewicz expanded on this factor  in a recent interview with Rotterdam based publication Non Reality, stating Innergaze was a creative process for them to engage together as a couple and the development of sound in Mutual Dreaming demonstrates how they are “navigating that intense framework as it changes over time”.

Proceedings open with the title track, inspired by the Brooklyn parties of the same name that Halal began with no real degree of long term planning soon after and Letkiewicz moved to NYC and have since grown massively. In interviews Halal has talked about the benefits of being immersed in a bristling community of like-minded musicians, promoters and DJs which obviously has added to the freedom of sound on this LP.

It’s also interesting to see this continual progression and support between the likes of Future Times, PPU and LIES flourish while some people become overly concerned with the current #EDM fad/craze/onset of the death of music as we know it [delete as appropriate] that’s dominating the US mainstream.

And it is freedom of musical expression that is most apparent from the brutal openings of “Mutual Dreaming”, a confidence to improvise that has you continually flipping the record to seek out unheard textures with each listen. Tracks such as “Relax” clearly have a melodic core, saturated as it is, but Letkiewicz and Halal aren’t frightened to deviate away from it, breathlessly returning to the squeaking detuned synth sounds at intermittent points throughout the rhythmic pulse of battered drum machines. There are hints of the same haunted house music that Legowelt and Xosar have been excelling at in recent times, most notably the endlessly floating “Autumn” which closes the A Side with kaleidoscopic flourishes of cosmically charged keys over a bubbling analogue groove drenched in fuzzed-out tape crud. At other times vague strains of cold wave are just about audible, smudged into melodic alliance with phased out Chicago House textures on moments like “Gravitate To Me” and the self referential “In Your Gaze”, providing justification for Vasicka’s desire to include Innergaze in the Cititrax canon – as if it was ever really needed.