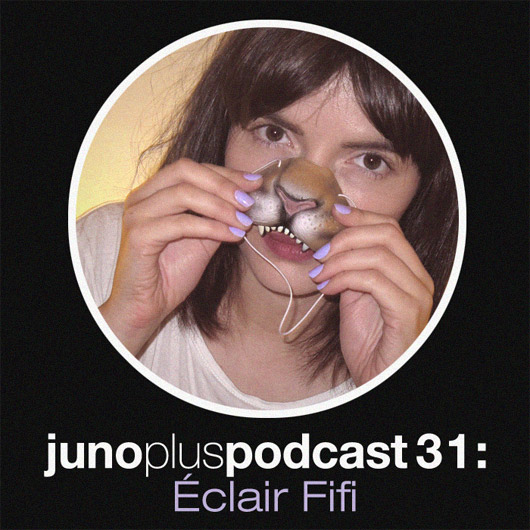 We welcome the LuckyMe collective into the Juno Plus podcast fold, with Éclair Fifi taking the controls for the 31st installment on a 30-minute mix that perfectly encapsulates the Scottish collective’s all encompassing musical approach.

Along with near neighbours Numbers, LuckyMe’s output over the past 12 months only served to strengthen how important Glasgow is for current strands of electronic music, with some stellar twelve inches from the likes of Lunice, Machinedrum and Jacques Greene. This looks set to continue in 2012, with the label currently preparing TNGHT, the long mooted collaborative project between Hudson Mohawke and Lunice in cahoots with the Warp label along with material from new label additions Obey City and Cid Rim.

LuckyMe is so much more than a label however, with their long running and wide reaching mixtape series (Untold mixing up post-punk?) complemented by an international party schedule that includes legendary stints at Edinburgh Festival and Sonar. Not bad for what started with a bunch of friends doing a club night in 100 capacity vegan rock venue in Glasgow.

Given LuckyMe’s long-established affiliation with the aforementioned Barcelona based festival, it’s somewhat pertinent that this mix was first verbally agreed on at last year’s festival on the dancefloor at Sonar by Night as Bok Bok and L-Vis 1990 teared through their set.

Regarded as the LuckyMe go-to party starter, Éclair Fifi seemed the perfect LuckyMe representative to do a podcast for us and her mix fully justifies this title, cramming everything from Grimes to A$AP Rocky to 80s NY House in between a healthy dose of material from the LuckyMe family, both released and unreleased. Éclair was also kind enough to answer a few questions over email.

Hi Éclair, how are things?

I believe you are currently engaged in an art degree of some kind, how’s that going?

A lot of online press for you states you are the “LuckyMe party heater”. Is this your official role or are you involved in the label side of business too?

Yeah I guess you could call me that! Everyone in our crew trusts me whatever time I play.  My input, help and involvement to the label is highly valued but I don’t have any grown up “clerical” type duties when it comes to running the label.

Luckyme had a pretty impressive 2011 – any personal highlights for yourself, and what do you guys have planned for this year (if you can say)

I wish I could say but everyone will know soon enough. I actually can’t believe what a year this is going to be for everyone and the label. Shit is wild.

This podcast was verbally agreed to on the dancefloor of last year’s Sonar festival, and Luckyme always bring something special to Barcelona in June. What do you guys have planned this year?

And what a good night that was! I’m so happy to say that we are back again at Sonar this year. On the Sunday we’re running a party at Moog just off La Ramblas. I can’t disclose which guests we have but everyone knows we deliver! Just come and you won’t be disappointed.

And this mix was recorded on your brand new turntables right? Was it just two decks, a mixer and a stack of records or have you used some more advanced mixing software?

This mix was made using both old records and Serato on the “new” decks I bought second hand off some friends. The pitch controls are kinda screwed and I have a basic scratch mixer. They do the job though! I didn’t have turntables for about six years, the only time I used them was when I played out, so it’s real nice having some in the house finally.

Alongside the often-cited trinity of Rinse FMers in Jackmaster, BenUFO and Oneman, you’re one of the few active DJs who don’t rely on producing some shoddy R&B embellished house to get bookings. Is there a production itch within you or are you happy with all the fun that comes with Djing?

I’d love to put out music but lately it’s just a matter of not having much spare time on top of University and gigs. Perhaps a thing for summer break but DJing is enough for me just now, it satisfies my urge to perform and engage in new music and meet new people. Getting a bit nifty in Logic lately though, so look out!

You’re renowned for playing a broad spectrum of both new and old music – as this podcast demonstrates – so what tracks have always remained a part of an Éclair Fifi set?

I can’t really pinpoint specific tracks I always play in a set but I am guaranteed to play more often than not a Drexciya track, as well as other Detroit stuff, at least one old Latin Freestyle track, some R&B, hip-hop, old and new house, the odd grime instrumental and loads of LuckyMe records. I gravitate between decades and bpms a hell of a lot.

What new tracks have you been road testing to a good response?

All the new unreleased LuckyMe stuff that I am given, I test out pretty much as soon as I can. I am biased but the majority gets explosive reactions. Tracks from Cid Rim and Obey City are amazing (new additions to the label) and brand new material from S-Type, Lunice and The Blessings all doing it for me just now.

I’m always intrigued to hear what people immersed in an environment of near incessant electronic music listen to relax and escape the sound of a 4×4 kick drum. What do you listen to when you’re not checking promos/trudging through soundcloud/flicking through vinyl?

Funnily enough I still listen to mostly electronic music when I’m relaxing, even tracks with a kick drum, like Other People Place or weird Kenny Larkin stuff. I do love new and old prog/folk/soul to relax to as well – Linda Perhacs, Jeff Phelps, John Martyn, Nick Drake, Julia Holter, Nite Jewel etc, all that music helps me draw ideas and reset myself for a new project.

Juno Plus Podcast 31 – Éclair Fifi by Juno Plus on Mixcloud