HTRK: Coming In From The Cold 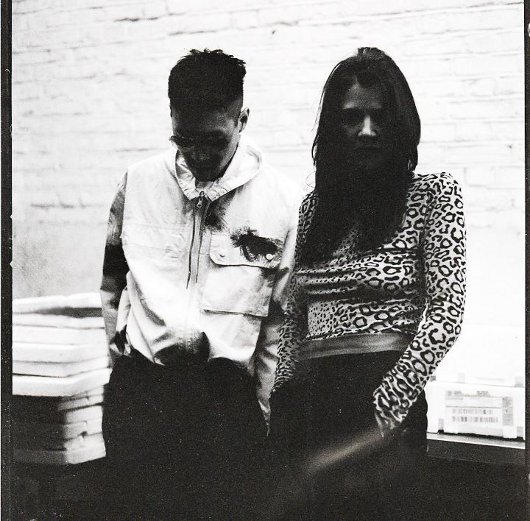 “Life always finds way of throwing a curve ball at you.” Coming from Jonnine Standish, lead singer of Australian duo HTRK, it’s an understatement. The band have experienced more up and downs in the past two years than most bands can expect in a lifetime; tragedy struck in March 2010 when original band member Sean Stewart took his own life. Standish and fellow band member Nigel Yang completed the recording of their third studio album Work (Work, Work) as a duo, in recording sessions that turned out to be a grieving process as well as a creative one.

The album, which was two-thirds completed while Sean was still alive, served as the ultimate sonic monument to Sean’s memory.  A dark, dense, richly textured set, it requires months, rather than days or weeks, to wrap your head around. It is a dense, burdened, at times painful, but always beautiful odyssey through post-punk, industrial and dub experiments. The album received a mixed, almost confused critical response – many writers seemingly didn’t know how to approach it – but HTRK have been quietly championed by the likes of UK techno stalwart Regis and revered leftfield producer Actress among many others.

Since releasing Work (Work, Work) last year, the band have left their temporary home in East London and returned to their native Australia (Nigel in Sydney, Jonnine in Melbourne), where they have commenced work on their next, as yet unnamed album. As Aaron Coultate found out, it’s been a time of new beginnings for the pair, with the spectre of hope looming over plans for album number four.

You’re working on a new album – how far into the recording sessions are you?

Jonnine: Well we are in the demo stage right now. We’ve had new thoughts and new formations, and I have a new attitude to my voice. I am wanting to push it in new ways, be a little more playful and, dare I say, fun (laughs). We are writing back here in Australia after being away for six years. We’re planning to record new material in New Mexico mid year, and actually have a producer this time, unlike Work (Work Work), where it was really me and Nigel and against the world. We’re letting someone else into our world this time.

You guys put the album together yourself right? Right down to the production side of things too. I read that most of it was done in a little makeshift studio in London Fields.

J: Yeah. That album, to me, is soaked in everything London. We’ve been living in London for five years. I don’t know if many people know this really, but we’ve had that little rehearsal studio in London Fields for a while now. We soundproofed it and set it up ourselves and share it with some other bands. It’s a badly ventilated practical little space and always has a kind of ‘man air’ I would call it, a kind of drummer sweat taste from the band before us. At least we could walk down to Broadway Market and London Fields for a break. We made a decision to do everything ourselves after talking with our old manager. (Paul Smith, shared manager at the time with Throbbing Gristle and Factory Floor). We recorded, produced, mixed and did everything in that space. We just hacked away at it for days, weeks, months, on end, in this isolated world we created for ourselves. We worked on whatever song we felt like that day and then compositions changed further once the order of the album was taking shape. We tried not to be corrupted by external influences or current trends in music. We hardly socialised or went out to see live music. We were aiming to make something timeless. Nigel was even trying not to pay attention to street advertising (laughs). For a lot of people, Work (Work Work) is just making sense now, and our music sometimes does take a while to sink in.

It’s interesting you say that – the album was certainly a slow burner for me. To have something people are still talking about six months after release is an achievement in itself these days.  What was the recording process like after Sean passed away? Is Work (Work Work) a monument to him in some ways?

J: It is a monument to Sean. The time Nigel and I spent making that album got us through that period of grief. It was like looking at an object from every angle under different lights. The object was Sean. We went over every remembered conversation, every email and every recorded rehearsal with the three of us. We worked over the demos and sketches that Sean had played on, we even kept some slip ups and little flaws rather than redo the part again without him. It would have been a different album if Sean was here and we weren’t grieving of course. But we tried to make the album he envisioned.

It sounds like the recording process had healing properties for you guys.

J: It was a pretty amazing counselling session, yeah, it helped get us through. We were trying to work out why and how things got to the point they did. How did we get to this breakdown in communication. It wasn’t all sad, we were also remembering the really funny and good times we had together. The three of us had a strange and fascinating bond – and the album was a documentation of this strange energy that existed between the three of us caught on record. I feel that now, with a little bit of reflection – when we were in the thick of things, I wasn’t quite sure what we had created, so some time apart from the album has been helpful. I got quite addicted to the album at one point myself.

Some artists hate listening back to their own finished product.

J: I can’t even apologise – I really enjoy listening to our music.

There’s no need to apologise –

J: That quote will probably come back to haunt me. 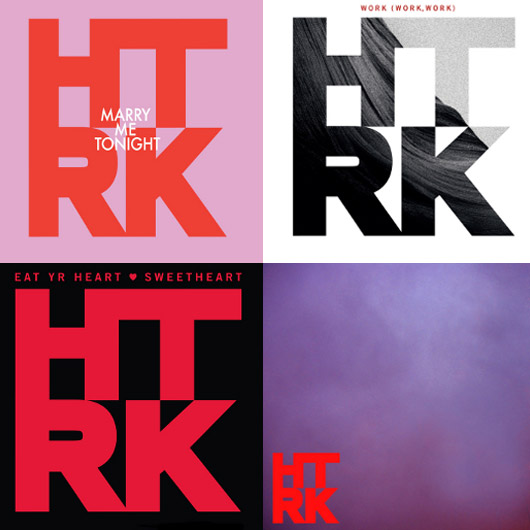 You said desire has been a major theme in your previous work. What themes have you been exploring for this album?

J: I find the feeling of desire so cool and maybe more interesting than pleasure. I like to hold it there. Yeah it’s a theme I have used on both albums. On Marry Me Tonight, there is a driving endless longing you know. Desire was a kind of predator or a stalker. In contrast, Work (Work Work) was about going under into it all. The latest themes involve jealousy, narcissism, surrealism but it’s about coming up for air. More clarity and a little more innocence, well a little.

I arrived at your music through Work (Work Work), then went back and explored Marry Me Tonight and Nostalgia from there. I found Work (Work Work) in particular is a heavy, almost draining listening experience.

J: Ha, yeah, I really gave in to my unhealthy desires. They might not be the desires you think they are though. I am giving in to my own contentment, laziness, ageing, decay, teenage lust, competitiveness, jealousy. All the things we try and fight off to make us a better person, I am having sex with on this album (laughs). I guess that is pretty draining. With Work (Work ,Work) I pushed further down where I allowed my thoughts to go. It’s an unusual album and maybe hard for some people to come to terms with – it’s not really a pro-life vibe is it? More like an antibiotic. I’m not trying to seduce anyone, plead with anyone or turn anyone on with my voice. That can make people feel weird.

Working with a producer for your next step is an interesting move – especially considering how tight knit you are. Is it a move you are approaching with trepidation?

J:  It’ll be interesting to let someone into our world. It’s a very big deal for us, and the producer is somewhat of a kindred spirit. We don’t need to talk too much with him about where we are coming from – there is a connection. 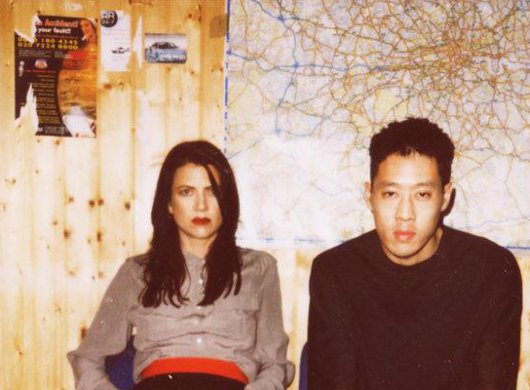 You are both back in Australia at the moment – are you doing any recording there or is it just a holiday?

J: It’s a good long break to spend time with our family and get to work. We’re doing the background stuff and demoing here in Australia. It’s a good place for us to get more done. This is the first time I’ve been working on music full-time, it’s been liberating  – in London just surviving takes it out of me sometimes. The actual recording of new songs will take place in New Mexico later this year.

Your artistic careers have been divided between London, Berlin and Melbourne –three incredibly culturally rich cities. Where is home for you guys now? Which city, if any, do you feel most culturally aligned to?

J: Right now I’m split down the middle between London and Melbourne. I might feel more culturally aligned to London because I’m still finding it pretty surreal and exotic here. But Melbourne is home, wherever you had your childhood, wherever you played tennis on the road, is where home is really.  A friend compared getting out of London like being flung off a merry-go-round. Easy to get off but hard to get back on. It takes me a while to slow down but once I do…

You played with Tropic Of Cancer a few times last year, who are one of the few contemporary bands operating on a similar plane to you. How did those shows go?

J: Yeah they are so effortless. Their music, the simplicity of it and the pure emotion and minimalism of it, just blows my mind, I’d love to hook up with them and work with them in the future. To tour with them again would be great. 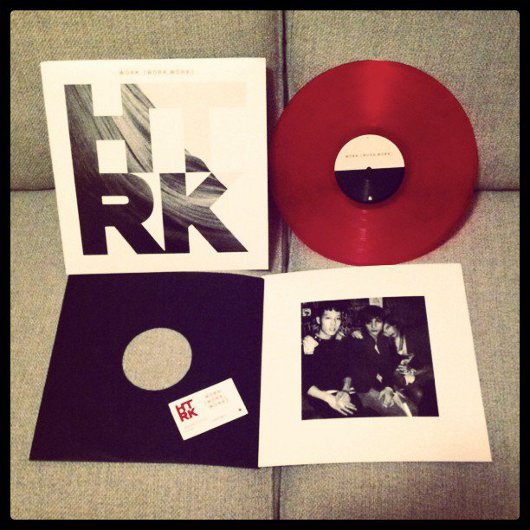 Regis, of Downwards and Sandwell District, is a certified fan. The link between techno and industrial is an interesting one, and it has a rich history in the UK. Do you listen to much techno?

J: Maybe it’s because me and Nigel are both ex-ravers. (laughs) We were heavily into the Melbourne techno dance scene in the 90’s.  I even wrote Autechre a five page handwritten fan letter from Melbourne. I never got a reply, that is pretty embarrassing. Nigel and Sean were really into Vladislav Delay’s album Multila. The feelings of that time had an impact on Work (work, work).

You guys make mixtapes regularly; how much music do you consume and what have you been listening to recently?

J: We go through a lot of music as we haven’t had a TV in six years. Lately I’ve been getting into Peter Rehberg, Alan Vega and Roy Orbison with my dad.

And what other plans do you guys have for the rest of 2012?

J: We have some interesting hopes and plans. Everything will make more sense after we record new stuff mid year. I’m interested in how we push the live show. We might get a chance to work with Blake Butler, a writer and novelist we love on an interesting project. And Mika Vainio, who we are a big fan is working on our first ever remix, that’s pretty weird and exciting. We have always thought we were un-remixable.