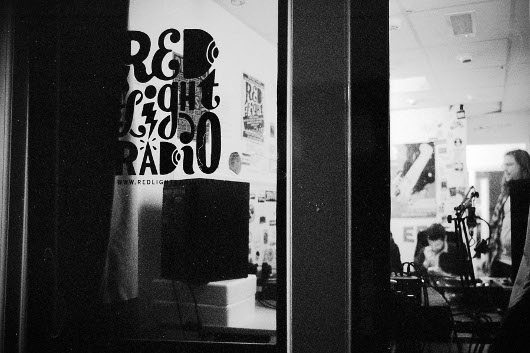 Red Light Radio, the brainchild of Hugo van Heijningen and Orpheu de Jong, has become something of a cultural beacon in Amsterdam’s seediest corner.

Located on Oudekerksplein, near the bustling heart of the notorious district from where it draws its name, the station was launched in late 2010. These days the cream of the city’s underground music scene can be found hosting regular shows; the people behind the excellent Delsin and Dekmantel imprints host monthly residencies, as does hirsute house don and Rush Hour/Perlon affiliate San Proper. The station’s remit extends well beyond the sphere of house and techno, however – Red Light Radio pushes everything from noise to hip-hop, afrobeat and black metal. The station is now a regular stopping point for visiting international guests, with the likes of Maria Minerva, Jamie 3:26, Jacques Renault and Beautiful Swimmers playing sets in recent times.

With a DJ set-up that faces out onto the footpath, DJs are often met with quizzical (and sometimes disappointed) looks from tourists expecting to see a scantily clad lady of the night. As such the station is central to an ongoing cultural rejuvenation of an area once avoided by locals, and evokes the spirit of New York’s East Village Radio while tapping into a similar community ethos that NTS has cultivated in London in recent times. Our resident Dutch photographer Gioia De Bruijn stopped by to take some snaps (Amsterdam techno-punk outfit Aux Raus were playing some records at the time), and we also fired Orpheu a few questions via email.

What inspired you to start a radio station in the red light district?

We were inspired by East Village Radio in New York, and we really wanted the radio to be visible from the street. To have a space that’s open to friends very much adds to the whole thing; DJs bring their friends and it becomes a social event as well as a radio show. We had our eyes on the Red Light District since this neighborhood is undergoing a heavy transformation – the city is trying to reduce the prostitution in the district and spaces are opening up for creative initiatives. It’s an ideal spot because for us because it’s in a crowded neighbourhood and everyone who passes by looks into the rooms, so we have a lot of visibility.

I started out as an artist, then became a graphic designer, first with Marco Sterk (aka Rush Hour’s Young Marco), then on my own. But I’ve been DJing and collecting records for a long time and for two years I hosted a weekly radio show with Marco called Weird Science, on Studio 80 radio. My partner Hugo van Heijningen has played in bands like Malkovich and Firestone and is also heavily into music on different levels. The programming of the radio goes all over the place from house to new wave, metal, afro, disco, bass, noise and more but it’s a perfect reflection of our combined musical interests.

The Red Light Radio is obviously the work of Dutch artist Parra; how did that come about?

Yes that’s right, it’s a small city and he is a good friend of ours!

I imagine you get some confused looks from passing tourists…

All the time. There are thousands of people passing through here every day – they all look at the windows so you can imagine they’re quite surprised to see a DJ in a radio studio and not another half naked lady.

Is the station open to the public – do you find people often wander in to say hi?

The door is closed, but if there’s a friendly face at the door it always opens. People usually bring some friends along when they are doing a show, and people we know always pop in when in the neighbourhood. Also, curious people knock on the door if they want to know what is going on here.

What has been the general reaction the Red Light Radio? What service does it provide for Amsterdam’s music community?

Since the beginning we’ve had massive support. We put out the kind of music you would not hear on “normal” Dutch radio, and I think the station has become a bcentral point for a large part of Amsterdam’s music community. We are quite rooted in the city’s music scene, so (when the station launched) we invited mainly friends who we thought were doing cool stuff, and then the rest followed. Also more international DJs and musicians that are passing through town know their way to the studio. We have created a platform that, with the input and support of a lot of people, has grown into what it is now.

What are your plans for the station – how do you see it developing in the coming months and years?

Keep on going! We’re in the process of making sure we can stay where we are for the next five years. We recently made a clone of the radio that fits in a box, so we’ll be broadcasting from different locations and doing more collaborations with clubs, parties and festivals. We will do everything we can to keep the station going and continue to be a source of great music in Amsterdam.