If you are a DJ then you’ll already be familiar with the reputation of Rane, the American pro audio designer and manufacturer. Now the company has taken its no-nonsense approach and created a dual personality mixer, the SixtyOne, in partnership with Serato Scratch Live.

The SixtyOne serves as both a two channel mixer with four analogue inputs and an interface for laptop DJs using vinyl or CD timecode. The mixer has been integrated with USB soundcard technology so it can be hooked up to a laptop directly, negating the need for a fiddly breakout box. Vitally, Rane have teamed up with DJ software pioneers Serato for a design that will satisfy the needs of both analogue and digital DJs. The SixtyOne comes bundled with Serato Scratch Live, which means you also get the Serato DVS control signal for both vinyl and CD format. Having calibrated Scratch Live for use with the analogue signal, select the correct source in the software and the corresponding channel on the Rane mixer. This makes it as simple to switch back to a complete analogue set up as it is to integrate digitally, solving the previously inevtaible irritations that arise when a digital DJ plays after an analogue DJ and has to rewire the back of the mixer. (The SixtyTwo goes further still, with two USB ports on the back so that one digital DJ can mix seamlessly out of another; it also allows one half of the mixer to be mapped to one computer while the other side is mapped to a different computer.)

The layout is as intuitive as any two channel mixer can be, with the two program channels effectively mirroring each other (except for the source selection). Under the source selection is a pan control; below that is a filter encoder. The filter is actually a hardware effect that exists on the mixer rather than being a control for software effects, although its parameter is edited in Serato; those parameters are saved on the mixer. Below the filter encoder is the flex FX button, which assigns a channel to the FX bus for sending a signal to either an external analogue unit or software FX via USB. To the right are encoders for controlling the signal level and High, Mid and Low EQ, separated by a simple LED level meter. On the left hand side of the mixer you’ll find the mic level control with Low and Hi EQ encoders, under which is a single blue backlit button for sending the signal to the FX loop. On the right hand side is the master mix level output with control over session in and out levels – this is particularly useful for recording your mix sessions. Under this is the headphone monitor section; one encoder controls the level going to your cans and the other pans between your cue and main channel, underlined with a split cue toggle button. At the bottom of the mixer are Rane’s magnetic faders for each programme channel and a cross fader. There are plenty of possibilities for setting the contour of each fader with sliders and the green backlit buttons that allow you to swap the channels quickly or reverse the contour. In a band across the middle are a brace of cue assign buttons with programme mute joysticks flanking and flex FX assignment directly above. 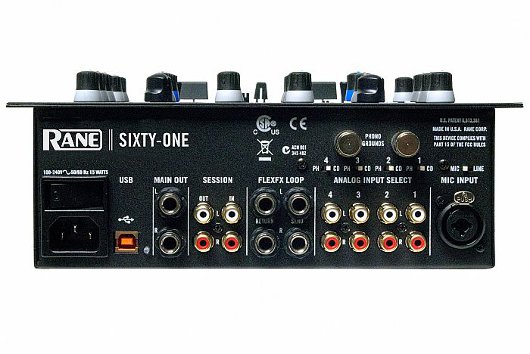 It quickly becomes apparent that this mixer has been designed with a certain kind of DJ style in mind. Rane’s magnetic faders are perfect for cutting, scratching and those quick mixes you would associate with the performance type DJ you might find in the DMC championship. (In fact, they have dedicated a custom version of their Sixty-Two mixer to DJ and producer Z-Trip.) Rane take pride in the close relationship between it designers and US-based manufacturers and that leads to a better build quality – this is certainly the case with the SixtyOne. Essentially, Rane have made a mixer that sounds great and at the same time solves a very tangible problem for modern DJs, namely switching back and forth between analogue and digital set-ups.

All of the faders move freely and the buttons are quite bewitching, as they have almost no travel in them. The backlit LED will help DJs keep track of what configuration they are in. The only niggle of concern comes from the look of the encoders, with plastic veneer not quite befitting of the otherwise quality feel of this unit. However there are plenty of nice touches to make up for it, like ¼” headphone and 3.5mm headphone jacks. Around the back there are proper phono grounds, a mic input that takes both three pin XLR and ¼” jacks, and power, which is delivered using the sturdy three pin euro style power lead. The main outputs are a pair of ¼” jacks. There are drivers to install for PC users: this can be a very fiddly and frustrating experience and it’s best to check the compatibility of your machine with Serato and the SixtyOne before purchasing. Rane aren’t the only ones out there with a USB mixer of this type – Vestax, Behringer and marketplace new comers DJ Tech all have two channel mixers which can be hooked up via USB for use with Traktor or Serato. Allen & Heath also have a four-channel mixer and deck controller bundled with Serato’s ITCH software. However, Rane has a distinct edge with its superior magnetic faders which are good for scratching and this, along with the attention to build quality, will serve them well with this unit. Overall, Rane have delivered a dynamic solution for digital and analogue DJs.