Cage & Aviary: What’s In A Name 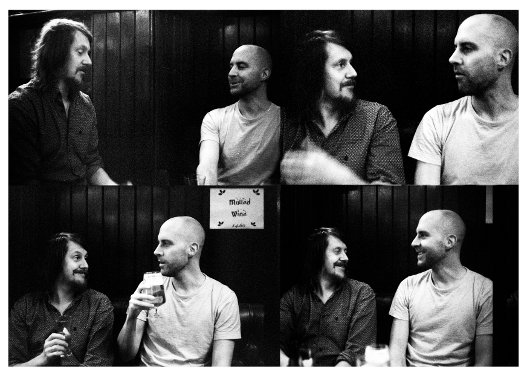 There’s a noble history of the eccentric and absurd woven into the tapestry of British music. It can be found everywhere, seeping into the charts or submerged in the underground, and it’s one of the reasons why these isles have contributed so much to emerging and experimental music forms. A subtle appreciation of the absurd can be found in the output of South London based duo Cage & Aviary, aka Jamie Paton and Nigel Hoyle, who combine a quiet obsession for analogue experimentation with loose, creative flair. “I think sometimes people get confused with the belief that absurdity means something can’t be serious,” says Nigel. “Sometimes absurdity, and things that don’t quite make sense, can be a good way of finding a new perspective, and it opens you up to new ideas. That’s what Cage & Aviary do – we try to find things which will elicit a response, any response, from the listener.”

Nigel hastens to add that treading such a path can be a precarious business, “because at the end of the day there isn’t much of a difference between Devo and Oingo Boingo”. “I happen to like both,” he clarifies, “but there were certain times when Oingo Boingo went over that invisible line of credibility, while Devo kept it locked down in a robotic, crazy place, and were all the better for it.”

It was the experimental, Berlin era output of one of the great British musical eccentrics, David Bowie, that Jamie and Nigel first bonded over when they met by chance at Troy Bar in central London in 2007. “They were playing a lot of Bowie that night and “Another Green World”-era Eno, recalls Nigel. “I went outside for a smoke and somebody dropped a lit cigarette in my pocket, and suddenly I was set on fire. Jamie was one of the people who put it out. We got talking about music and things progressed.”

The two musicians arrived in London from opposite ends of the British Isles; Nigel from Dorset and Jamie from Dundee in Scotland. The ornithological moniker is derived from a magazine that Jamie’s dad, a bird-fancier and breeder, used to buy frequently. When the two sat down to discuss what title they would stick to their musical endeavours, it was the one that, well, had the most wings. “It’s British sounding, it’s kind of quirky, and, most importantly, it isn’t trying too hard,” explains Jamie. Although Cage & Aviary is foremost a nod to Paton Snr, Nigel reveals himself to be a bird fancier of sorts too, keeping live quail and chicken in the backyard of his Bermondsey flat (“I like to bring the countryside with me,” he says). 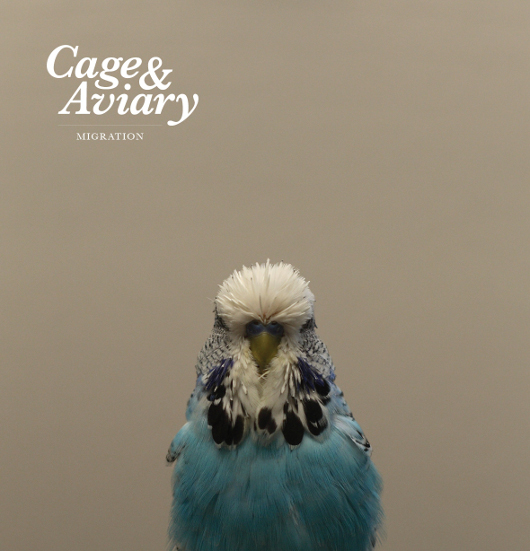 In many ways they constitute the perfect duo; Nigel the seasoned session musician, producer and songwriter, and Jamie the DJ with studio know-how and a hawkish eye for graphic design. “I come very much from a leftfield, indie kind of place,” explains Nigel, a bassist with 90s Britpop band Gay Dad. “I was doing a lot of pop writing (when I met Jamie), which I hated, and I just wanted to do something that was good.” When quizzed about why he enjoyed working with Jamie more than his work in the pop field, Nigel proffered some salient words on the benefits of collaboration: “When you get to a certain point – and I’m not exactly a spring chicken when it comes to making music – you just want to hang out with people who are up for giving. It’s so much better to have a share of something good than all of something which isn’t special. You need to create with a spirit of ‘yes’, and that’s what Jamie and I do.”

The duo spent their early years tucked inside Nigel’s studio on Walworth Rd, obsessed with idea of making the perfect 12 inch. Their first completed piece as a duo was, somewhat appropriately, a cover version of Eno’s “Another Green World”. Tracks like “Television Train”, released on Andy Blake’s now defunct Dissident imprint, sprawled out over 12 minutes. “At that particular point, with a two sided 12”, or a one-sided vinyl in the case of Dissident, there wasn’t much more we could fit,” says Nigel.

As well as releasing on their own The Walls Have Ears label and Dissident, Cage & Aviary also graced DFA sub-label Death From Abroad and Mock N Toof’s Tiny Sticks. With Blake winding up Dissident in 2009 and Tiny Sticks entering dormancy in the same year, the approach from Norwegian disco icon Prins Thomas was a timely one. While their previous releases had only exposed the duo’s work to a relatively small -but admittedly well informed – audience, Prins and his Internasjonal imprint promised to offer Cage & Aviary significant exposure. 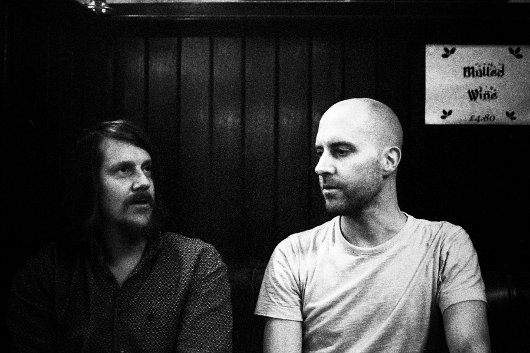 “I met Thomas at a Lowlife party in London, and he gave me a big hug when I went and introduced myself,” recalls Jamie. “He said he was a fan – obviously he’d had a few drinks by this stage – but I followed it up and emailed him some tracks.” The Norwegian swooned over the material so much he rejected the notion of releasing just a couple of singles. “He wanted to do an album straight away”, says Jamie. “Up until then, our audience consisted of DJs and serious record buyers. Everything was pushed by internet word of mouth, so we felt (making an album) was an obvious step to take. As soon as he suggested it, we said yes.”

Fast forward to 2012 and their debut opus, Migration, has just been released. The album sees the duo call on a range of vocalists (they also contribute their own vocals on several tracks), giving the set a feel of accessibility without ever losing a traceable sonic aesthetic. As well as new versions of familiar favourites – 2007’s “Giorgio Carpenter”, the aforementioned “Television Train” – Migration veers effortlessly from raw proto house thumpers to off-beat disco, dubbed-out punk funk, skewed Balearica and vintage synth-wave. Above all, a subtle eccentricity ties it together. After all, a track titled “Giorgio Carpenter”, with its titular nod to two legends of electronic music, could easily fall into the realm of risible pastiche, but instead it’s a sprawling soundtracky epic in its own right, albeit one with tongue lodged firmly in cheek.

Nigel says the Cage & Aviary focus moved from making the perfect 12 inch to exploring the art of perfect house music. “We found it interesting to look at house song writing form – the actual way that perfect tracks are structured, and how the elements build, and what an excellent house or proto house vocal is,” he says. “We wanted to make proper dance music; something that works really well at 3am at a place you’d want to be.”  Perhaps the best place to hear Cage & Aviary material being played – aside from one of their live shows or Jamie’s DJ sets – is at one of Andy Blake and Joe Hart’s World Unknown parties in the grubby depths of Brixton, South London. In typical fashion, Blake had his finger on the pulse and was one of the duo’s first certified fans. “Andy was the only guy who had a white label promo of the album, so he’s been playing three or four of them back to back at World Unknown parties, in the earlier hours,” Jamie explains.

Geography is an important, and sometimes overstated, variable in electronic music, but the fact Jamie and Nigel both live in South-East London has made it easier to collaborate and the south-of-the-river mentality has undoubtedly helped shape their sonic and visual aesthetic. They are now firmly embedded in a South London music community that places emphasis not on what looks good, but what is good. “Part of the charm of the place is that it’s, well, a bit shit, but that’s what makes it fantastic,” says Nigel. “People don’t take themselves too seriously; it’s not really about being stylish, it’s about being good. In some ways it has a mentality similar to Manchester or Liverpool. If you’re being a bit of a dick, you won’t last very long.” 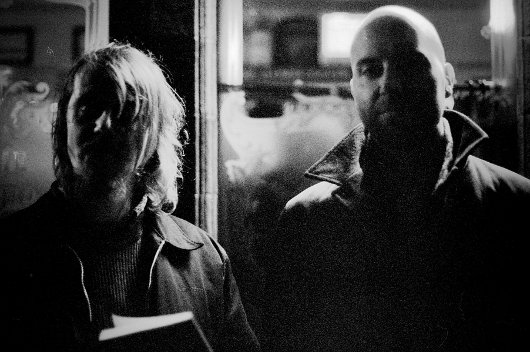 Jamie continues: “I like the idea that a lot of people don’t have much interest in this area, and that’s fine with us, it means we can keep our heads down.” The World Unknown parties provide a focal point for the South London house and techno community – regular attendees also include Felix Dickinson, Legendary Children’s Pac and Emotional Rescue’s Stuart Leath – and although Nigel’s family commitments prevent him from breaking the 2am barrier, Jamie has been known to occasionally emerge bleary eyed from a WU soiree. “I went to one recently at the Caravans Pool Hall at the top of Rye Lane,” he says. “It went right back to the roots of throwing acid house parties. You’re in this odd venue with polystyrene, gridded ceiling, like a shitty office, and through the glass there are loads of people playing pool, and in the middle there’s a World Unknown party with a smoke machine and strobes.”

With the album now out, Jamie and Nigel plan to further refine the Cage & Aviary live show. Still a work in progress, it sees Nigel and Jamie tweaking and experimenting with improvised jams on stage. There are also plans afoot to resurrect the long-dormant Walls Have Ears imprint, with Jamie revealing they are halfway through a remix project in which they turn their hands to “stuff that no one else has remixed before”, and there are also plans afoot to release more material from other artists. As well as serving as a conduit for early Cage & Aviary material, The Walls Have Ears was responsible for releasing perhaps one of the most under-appreciated leftfield-pop records of the past few years, Sidwho?’s “Vote Bowie For President”. Upon its release in 2009 it was championed by New York radio impresario Tim Sweeney, but failed to achieve the underground success it deserved. Its under-the-radar status may not remain for long, however, with Prins Thomas hinting that he’d like to reissue it on Internasjonal with new remixes.  Jamie and Nigel’s strong working relationship with Thomas – chiefly borne of a mutual appreciation – is indicative of the tight-knit community of artists and devoted listeners in which they currently exist. It’s one that appeals to both Jamie and Nigel: “I think that the market nowadays consists of people who love and know music,” says Nigel. “We are getting to the point now where there are a very small number of record shops, so as an artist you probably know some of the people who are buying your records. I get excited by thinking about who actually buys music – and these days it’s music lovers.”

Nigel compares vinyl’s status as an increasingly boutique industry to his experiences as a pop writer: “It was depressing, because if you came up with a good idea, the process would quite often dilute it. Records were being bought by people who didn’t like music, but looked at it as something to buy, like groceries. That used to be what drove the music industry, because there used to be record shops everywhere, it would be part of your shopping agenda,” he says, before pulling himself up and apologising: “Sorry – I was about to launch into a frothy-mouthed rant”. But his excitement is justified; if the record buying public really does consist of discerning, knowledgeable music lovers, then Cage & Aviary should do just fine.