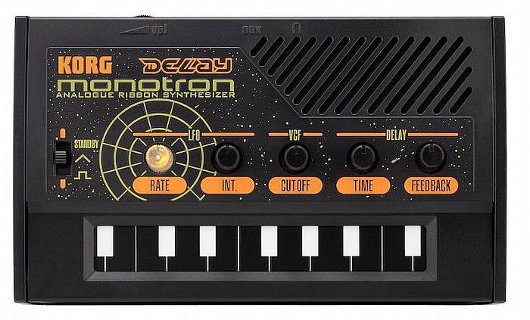 Having spent almost 25 years away from the analogue world, Korg returned in 2010 with the introduction of the Monotron series. Now we see the release of one of their smallest products yet, the Monotron Delay.

Korg have come up with a unit that is small; so small, in fact, that a proper description of it would be to call it a micro analogue ribbon synthesizer. It’s a petite 120mm x 72mm x 28 mm in size and will fit comfortably in the palm of your hand. It’s a featherweight 95 g, which deceptively hides the full force of its heritage. The Delay – one of three products in the Monotron series – has a focus on sound effects creation. With the choice of square or saw tooth wave forms and a pitch modulation LFO, the unit is actually powered by the same filters that you would find on one of Korg’s first synthesizers back in the 1970’s – evidence of this can be found in the fact that it takes about 30 seconds for the machine to warm up and stabilise after switching on. Two small pots, which allow you to change both rate and intensity, control the LFO, and you can control the cut off frequency. The Monotron’s space delay-like effects are teased out by controlling the timing and feedback knobs. All inputted simply by pressing a well aimed, small, finger on the ribbon control on the front.

The dual AAA battery powered Monotron Delay has a built in speaker but there is also a one eighth of an inch size headphone input, which you could hook up to any larger sound system if you wished. Not stopping at simple waveform inputs by the ribbon control, it’s also possible to use the filter and delay of this little machine to add effects to other sound sources by plugging them into the similarly sized auxiliary input right beside. The filter has the sound of the original Korg MS10 or MS20 and is very responsive and wild. There is no means to control its resonance but then again this is a very small unit with limited space on board. Next to its ribbon and filter control it also has an analogue delay built in which has exactly the sound you would expect from the sort big and heavy box that you would have found in the seventies. Its snarling, crunchy voices are reminiscent of the sort of effects found in dub reggae or even in old sci-fi b movies. You can make quite convincing spring reverbs sounds by shortening the delay. There are a wide variety of possibilities available with this little machine; you can use it to rough up sounds you have recorded in your studio or, conversely, use it in a DJ set up. Or you can make it part of your live show set up if you’re in a band.

One of the drawbacks of this machine is that the noise to signal ratio is quite high. But, then again, old analogue delay machines from the seventies were also quite noisy, so in one sense its gentle hiss simply adds to the authenticity. Although all the units in the Korg Monotron series have the look of small toys, there is actually more here than meets the eye. It should be remembered that Korg were the first company to produce small, handheld  and battery powered guitar tuners in the form of the WT10 back in 1975. Making things small has been a part of Korg’s culture, from the microKorg to their nanoSeries USB MIDI controllers.

It should also be noted that this is Korg’s first return to analogue synthesis since the huge exodus to FM digital synthesis by consumers and producers in the early to mid 1980’s. The reason for this shift was primarily financial as digital products were cheaper to produce and far more reliable than their analogue predecessors. To their credit, Korg hung in there with their range of digital/analogue hybrid synths, such as the DW series, launched in 1985. But it was the M1, a digital synth which arrived three years later, that really put Korg at the top of the tree in terms of keyboard production.

The Monotron series is not completely unique, resembling the infamous Stylophone from the 1960s. (In fact Stylophone recently introduced us to its Stylophone beatbox.) There is also a mini ribbon controller by Gakken on the market , but neither of these products have the features crammed into Monotron series. Korg have produced a miniature version of its classic analogue equipment and given us more than one way of interacting with it.