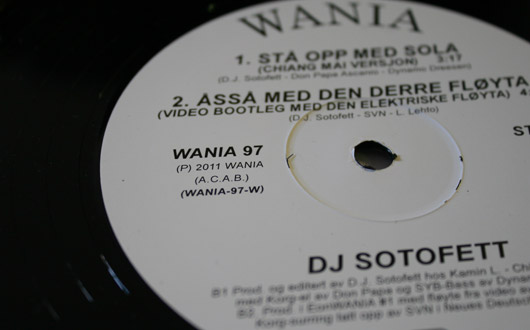 There are many things we love about Sex Tags Mania’s DJ Sotofett; the cloak of mystery he drapes himself in, the simple fact he’s from Norway, and his reliably deranged productions to name but three.

This week he followed up the after the blink and you’ll have to shell out on Discogs Driftett EP with Pulehouse; sounds like a Workshop artist covering “Pacific State” then subsequently getting bent out of proportion by John Heckle, and it only gets better from there. London types should head to the Baby Bathhouse in Stoke Newington to check Sotofett’s UK debut tonight – more on that here.

Operating under a similar veil of intrigue are Boddika and Joy Orbison, who turned in “Froth” and “Mercy”, with the latter cut a mechanical techno behemoth that practically heaves under the weight of its own unwieldy mass, audibly letting off steam as it goes. There was a long awaited return for Geeeman to the Clone Jack For Daze series, with “Bang’t” every bit as visceral and unhinged as the Traxmen referencing “Rubberband2″ from last year. There were a couple of tasty 10” arrivals this week too, most notably on the ever excellent M>O>S Deep imprint, with label boss Aroy Dee sharing the spoils with Ma Spaventi on “Wrecking/Mr Floyd”. Kresy meanwhile confirmed out suspicion that he prefers to operate in the murkier end of the rhythmic spectrum, releasing some psychedelic techno on Spanish imprint Hivern Disc.

Elsewhere on a vinyl tip, Cage & Aviary’s brilliant debut long player Migration was released in yummy gatefold vinyl format on Prinny Thomas’s Internasjonal imprint, while Jeff Mills was back with the Taken EP, and fledgling imprint Vae Victis followed up its debut 12″ from Blawan and the Analogue Cops with a decidedly different 12″ from the mysterious Nightjars.

Over at Juno Download, we were offered an intriguing insight into why Delsin is such a well curated with a shrewdly selected reissue EP featuring lost gems from Marc Kinchen and Luke Slater; the former a timeless deep house cut and the latter a milieu of ghostly and swirling synths from Slater’s seminal album The 4 Cornered Room , which he recorded as 7th Plain. Elsewhere Paul Dickow (aka Strategy) turned up on ace L.A. imprint 100% Silk with five fully realized tracks that dug into an artful world of sound, diverse in its sources and rich in character. There is a feeling of convolution to the Strategy sound which might put off some DJs, but somehow Dickow makes it sound like disparate elements from opposite cultures were always meant to be heard together.

Keith Fullerton Whitman released Generator on Editions Mego, which featured recordings of the two final dates of a 2011 tour of the US in which he composed experimental music on the fly using a variety of synthesizers and other electronic equipment. For first-timers, it’s a challenging and occasionally puzzling listen, but for those schooled in analogue ambience there’s much to enjoy. The two 18-minute pieces deal with similar themes, but vary wildly in sound and texture. Other notable digital drops came from Sigha (on Hotflush), Secret Circuit (on Tim Sweeney’s Beats In Space), Machinedrum (on The Index) and Randomer’s incendiary Scruff Box EP for Hemlock.

On the CD shelves we couldn’t take our eyes (or ears) off Johnny Jewel’s Themes From An Imaginary Film. Given the fashion for library music, disco noir and the synth-heavy soundtrack work of Goblin and John Carpenter, it was probably inevitable that Italians Do It Bettter would dip their toe into cinematic waters at some point. This is their contribution to the oeuvre – an all-star collection of melodic synth doodles, atmospheric compositions and faux cinematic themes produced by Chromatics/Glass Candy men Jonny Jewell and Nat Walker. Its 37 tracks are, predictably, impressively evocative, variously recalling sounds and styles previously employed by notable synth composers Vangelis, Jan Hammer, Claudio Simonetti and, of course, John Carpenter.