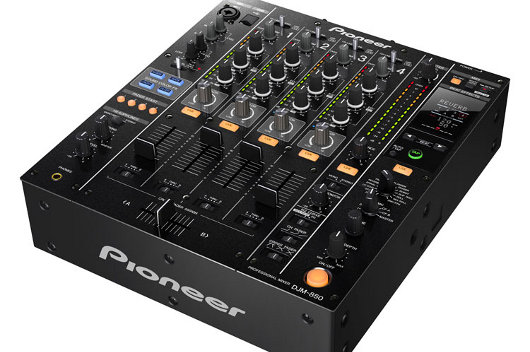 Looking cosmetically similar to both the DJM 800 and DJM 900nexus, in terms of features it would also seem to slot directly between the two models, featuring a built-in high-performance USB sound card and various functions for laptop-connected DJ performances.

It also features a wide variety of effects, including filter, crush, noise and gate, and beat effects such as reverb, flanger and a variety of rolls to add some dynamics to your mixes. What Pioneer are making a big noise about however, is what they describe as “the world’s first Beat Colour FX function”, which sidechains its existing colour effects to create some impressive sounds, which can be heard in the demonstration video below.

What is likely to be a big selling point for many is the built in Traktor Scratch 2 certified 24bit/94khz sound card, which means no additional audio interface is required for Traktor Scratch users. Of course despite the wealth of features there are inevitably some things missing from its older sibling – the ethernet ports to connect Pioneer’s CDJ-900 and 2000s are lost, but this is unlikely to worry most home users.

The DJM-850 will be available in black or silver colours, arriving sometime in March 2012, and will have a suggested retail price of £1299.