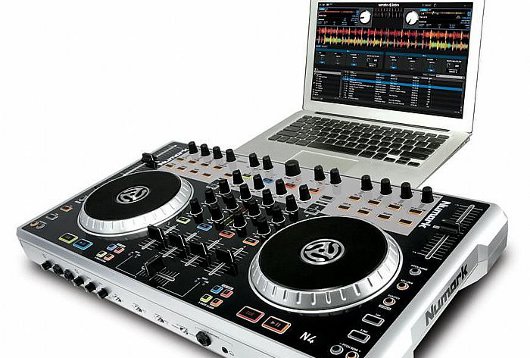 Numark have made a name by providing practical audio equipment for DJs at an affordable price. Having given us the Mixtrack DJ controller, Numark up the ante and deliver the N4 four-deck controller and mixer.

The Numark N4 is a digital DJ software controller. It comes with a version of Virtual DJ and a cut down copy of Serato called DJ Intro, which is designed for DJs taking their first steps on the journey into the digital world and thus don’t yet have the need for expensive audio interfaces. This machine offers control over the browsing, mixing and looping of your music, with access to the software’s effects parameters. But it doesn’t stop there; the N4 allows you to plug in your traditional analogue vinyl turntables or CD players and use it as a simple DJ mixer, without having to plug it into your computer, or even integrate your analogue set up with two decks of your digital set up via a USB cable. You can also use your analogue set up with time code and use the N4 as a mixer and audio interface. There are two separate inputs for microphones, with a quarter inch jack with adjustable treble and bass and independent gain control. With an easy, well spaced layout, the N4’s 571.5mm x 304.8mm x 61mm size and 3.2 kg weight makes it an easy solution for the entry level or intermediate DJ. The N4 is class compliant, which means two things; first, there are no added drivers to install, and, second, when you plug in the power and hook it up to your computer you’re ready to start immediately.

When the N4 is unpacked, you’re presented with an organised control surface with two handy jog wheels and a battery of faders, knobs and buttons designed to be intuitive and easy to use. At the top and in the centre is a large push encoder which serves as the main browsing control, with four buttons below that allow you to load your chosen sounds onto any or all of the four decks. To the left is the headphone control, which lets you change the volume in your cans as well as the amount of cue or master. To the right are two volume knobs that control the booth level and the master level separately. Flanking these basic controls are the tools which help you get to grips with the effects parameters in your software, namely four step encoders and eight buttons, which give you instant control over looping capabilities and effect manipulation on the fly. As you would expect, this configuration is mirrored on each side of the unit (as it would be for almost any traditional DJ mix console), which adds to the intuitive feel. In the middle are four faders, which control the level of the four decks or channels with bass, mid and treble EQ and gain control on each, with a cross fader lying underneath. You can configure the cross fader using the buttons either side, which also double up as the video fade controls for VJs who want to use Virtual DJ. The transport controls are two large play and cue buttons located under each of the jog wheels. You’ll find the pitch faders, along with various buttons that help change the pitch range, key lock, pitch bend, sync and tap tempo settings, at each end of the controller. The N4 also allows you to change how you interact with the jog wheel by giving you the choice of scratch or seek mode. 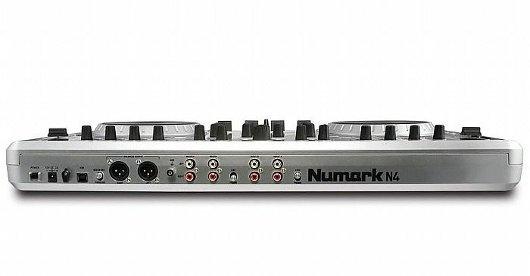 The N4 interfaces with either Serato or Virtual DJ with absolutely no glitches or lags. There is a pleasing amount of resistance on all of the knobs and the buttons all have a “click” feel about them. Using the EQ or gain control is also easy; there is a notch at the halfway mark, as well as a pointer on top, so you can feel where you are or have a quick glance to orientate trimming the levels. One very handy feature can be found in the fact there are two separate headphone inputs. One is for the larger, quarter inch jack type and the other is for the smaller, eighth of an inch jack (similar to the one you might find on an mp3 player or smart phone). Plugging in one set of headphones doesn’t stop the functionality of the other input. By that it’s possible to have two sets of headphones fully functioning at the same time, although control over the volume is not separate. The jog wheel has a single function, depending on what mode you are in, and getting stuck into a beat mixing session can be done immediately. Of course if you are new to the DJ world you can use the sync button to match up the tempo of your music allowing you to concentrate on the finer points of blending your sounds.

This multi functioning DJ station has two microphone inputs and along with its relatively small size means it’s ideal for a mobile DJ. The balanced XLR jacks at the back suggest this machine could be used in a semi professional set up. With the ability to hook into any operating DJ booth through the XLRs or even the RCA outputs, there is indeed more to this machine than meets the eye. But it should be noted that this is really geared towards entry level or intermediate DJs. What Numark have done here is to pack a lot of functionality into a small and flexible package.