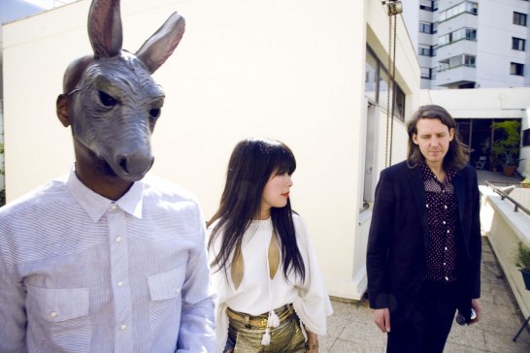 For those wondering what Pilooski has been up to since the release of Discodeine’s self titled debut album last year, it’s been revealed the producer has been stuck in a Parisian studio working with Tristesse Contemporaine on their debut album.

Tristesse Contemporaine is a Parisian trio whose members Narumi, Léo and Maik hail from Tokyo, Stockholm and East London respectively, and before hooking up with Pilooski their their only musical output to date had surfaced via Danton Eeprom’s Foundation Records imprint and an appearance on a Collete mix CD. Seemingly all three have dabbled in music in various shapes and forms before meeting and deciding to commence the Tristesse Contemporaine journey, quoting Talking Heads, Young Marble Giant and The Cure as inspiration for their sound.

Their self titled debut album – produced in its entirety by Pilooski – is due out next month, and comes wrapped in all sorts of press release conjured mysticism, with the label claiming the band disappeared for a week in July last year after boarding a flight bound for New York, with the trio unable to explain their absence when found wandering at dawn on the launch base of the European Space Agency.

Should this interest you, a chance to indulge in Tristesse Contemporaine’s sound can be found in their recently released single I Didn’t Know, which is very much in the Optimo-friendly dark disco vein, replete with scratchy post-punk bass lines and deep 1980s Chicago House style vocals and you can view the official video below.

Tristesse Contemporaine’s self titled album will be released jointly by Dirty and Pschent across limited edition vinyl and digital formats on March 19.