The project, which saw Sun Araw (AKA Cameron Stallones) and M. Geddes Gengras travel to St Catherine, Jamaica, has yielded both an album (ICON GIVE THANK) and a film (ICON EYE), for which you can view a trailer above. The seven track LP will be released in the usual FRKWYS style, with sumptuously packaged vinyl adorned with a Cabbage Patch style photo of the artists involved. The accompanying video, shot by filmmakers Tony Lowe and Sam Fleischner, documents Gengras and Stallones’ 10-day journey to the Caribbean.

Under the stewardship of label boss Matt Werth, the FRKWYS series has consistently inspired, amazed and befuddled us in equal measure here at Juno Plus HQ. Previous volumes (although remember folks there was no volume one) have been graced by artists as disparate as Oneohtrix Point Never, Carter Tutti, Juan Atkins and Julianna Barwick.

As usual the press release accompanying today’s announcement contains gloriously vivid prose describing the project: “What events would transpire in the Portmore neighborhood of St. Catherine can only be described as blessed. The gates opened wide and warmly, the musicians and filmmakers ate, slept, and smoked at The Congos headquarters, their mural-emblazoned studio, home, and spiritual compound. An environment steeped in the Ital lifestyle, Rastafarian reflection and meditation, and a rich community bubbling with musical energy, both young and old artist would learn an unspoken creative language.”

It continues: “GIVE THANK is not a dub reggae album, though it shares some of the genre’s production characteristics. Rather, it’s an album of Stallones and Gengras’s melodically experimental meditations ornamented with The Congos’ soulful vocal leads and four-part harmonies.”

RVNG Intl will release FRKWYS Vol. 9 and the ICON EYE film on April 10, 2012, on CD, DVD, and LP/DVD formats, and as a digital bundle. You can stream one of the album tracks (“Happy Song”) via the Soundcloud player below. 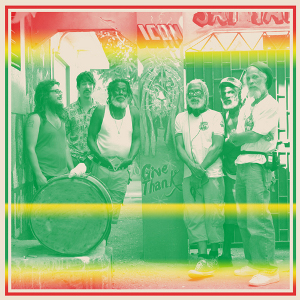