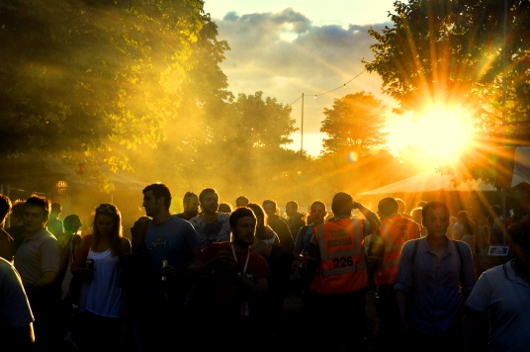 It’s not even Christmas yet, but the organisers of Field Day have just announced the first wave of act for their sixth festival, taking place in London’s Victoria Park on June 2, 2012.

Now a regular fixture in the festival calendar, the promoters behind Field Day have sidestepped problems plaguing the festival industry over the last few years, thanks in no small part to routinely diverse line-ups filled with quality acts (see our review of 2011’s event for some prime examples), and 2012 looks set to continue their success.

Those of a more indie based persuasion can look forward to acts such as Metronomy, Tortoise and a headline slot from Franz Ferdinand, but those who like their thrills electronic will no doubt derive much excitement from acts like SBTRKT,  Gold Panda, Hudson Mohawke, Julio Bashmore, Rustie, Com Truise and Rocketnumbernine, with perhaps the most exciting name on the list being Not Not Fun artists Peaking Lights, whose album 936 is one the Juno Plus team’s favourites of 2011.

Tickets are available now at the early bird price of £39.50, and can be purchased here.

The full list of acts can be perused below, with more to be added over the coming months.