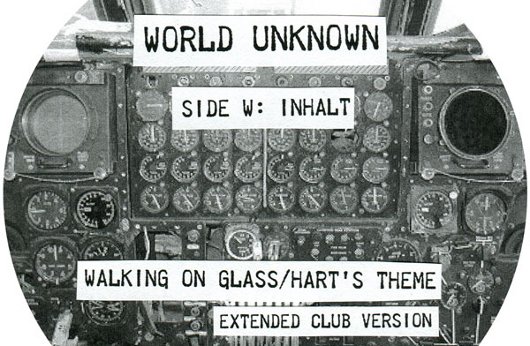 World Unknown have already served up some potential end of year list material – not least Tim Fairplay’s epic “Cleopatra Loves The Acid” – and the label borne from the monthly Brixton club night of the same name has called on San Francisco duo Inhalt to take care of the “W” side for the forthcoming release. Fascinatingly, the press release reveals that the duo originally sent in two separate tracks – “Walking On Glass” and “Hart’s Theme” – before Blake combined the vocal and instrumental elements from both into one “big vocal banger”. The same release informs us that the track also works as a Belgian New Beat-style jam when slowed down to 33 and pitched up +8.

On the flip side (side “U”), London-based duo Jam Factory serve up “Threads”, which is described as “slower, steadier and more strung out than their usual deep house grooves”. The press release continues: “expect to hear this at all kinds of places where pounding kickdrums, throbbing bass and flickering strobes is the order of the day. That’ll be most decent parties then.”

The news arrives after it was revealed that Blake’s other venture, Cave Paintings, is set to drop a third vinyl release next month.

World Unknown will release “Walking On Glass/Thread” on December 5, vinyl only of course.