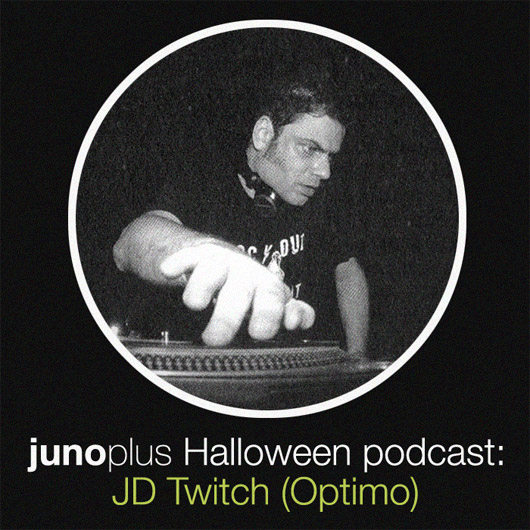 To celebrate Halloween we’ve got something quite special indeed: an exclusive Halloween themed entry into our Juno Plus podcast series, provided by none other than Optimo’s JD Twitch.
JD Twitch should require no introduction. As one half of DJ duo Optimo (along with JG Wilkes), his extensive musical knowledge and record collection is formidable, and in the form of the Optimo podcast series has contributed some of the web’s most esoteric and well researched mixtapes, with recent mixes covering everything from astral jazz and gospel music through to an extensive overview of 22 years of UK bass music.

Those in the know will be aware that Optimo’s Halloween parties (known as Optimo Espookio) are the stuff of legend, with the night encouraging some wild costumes which go far beyond the tired zombie looks that seem to be the London clubber’s garb of choice come October 31. Of course Espookio isn’t merely an opportunity to dress up, it’s also a chance for the pair to play some of the spookier and more tongue-in-cheek tracks that make up Halloween and horror’s lexicon of music.

No tracklist is supplied, though we can say that it moves from neoclassical goth through post-punk and music from several generations of TV and film soundtracks. Although it’s undoubtedly creepy, there’s also a comforting side to it that evokes cosy memories of commercially driven, domestic Halloweens fuelled by sugar and ghost costumes cobbled together with bedsheets. Twitch was also kind enough to provide us with a bit of insight into the mix and what goes down at Espookio.

Could you tell us a bit about how you recorded the mix?

I recorded it at home using turntables and dropping in the spooky FX from the laptop. There isn’t very much mixing involved. Those without a sense of humour and who take musically too seriously should possibly give it a wide berth.

Last night was one of the biggest events on the Optimo calender, Optimo Espookio. Could you tell us a bit about the history of the night?

We’ve had a Halloween party since 1999. That year Halloween fell on a Sunday and we had made a vague effort to advertise it as a Halloween party but hadn’t really gone to town on the production. We were somewhat taken aback when 90 per cent of the crowd arrived dressed in costume and I don’t mean a token witch hat, but rather full on, home made outfits. We had a very active internet forum back then and someone on there started calling the night Espookio and it stuck. From that year on, we made maximum effort every Halloween and would sometimes go to ridiculous lengths on the production for the night. It has become a Glasgow institution and is something we just couldn’t entertain giving up when we stopped the weekly night. I really can’t imagine there is a better Halloween party anywhere on the planet and that comes down to the gargantuan effort people here make, Glaswegian’s OTT love for Halloween and an immense sense of fun and not taking oneself too seriously – another very Glaswegian trait.

Would you say that the mix you’ve recorded for us is a decent indicator of the kind of thing you might play at Espookio, or is it a bit more focused towards home listening? How might your track selections vary on Halloween than other nights?

Yes. I’d play everything on here on the night though probably interspersed with other tracks that while perhaps not so explicitly referencing Halloween would fit the mood of the night. Both Jonnie and myself like a lot of quite dark music which we rarely get to play-  or at least wouldn’t normally inflict on a club crowd – but this is one night when people are up for hearing the scariest music imaginable as well as some ridiculously stupid records too.

We’re not exactly known for embracing Halloween here in the UK – until relatively recently. Do you tend to get a fairly emphatic response to the theme, or do you find people can be quite reserved in terms of dressing up?

Reserved is definitely not a word I’d use to describe people’s attitude to dressing up here, as Glaswegians are simply mad for Halloween. If you are on the streets of Glasgow on Halloween weekend, the vast majority of people will have made some sort of effort to dress up. It is much more pronounced here than in the rest of Scotland and indeed the UK. The Irish also love Halloween and indeed Halloween was born form the Celtic and Gaelic festival of Samhain, meaning “summer’s end”. The word “Halloween” is of Scottish origin and is a variant of the English “All Hallows Eve”. I think a lot of people have forgotten that Halloween originated here and isn’t an American invention, although of course it is they who commercialised it and introduced the notion of “trick or treat”, something we in Scotland have called “guising” since the 19th century.

What’s the most memorable costume you’ve seen anyone wear to Espookio?

So many! I think perhaps the couple who came as John Lennon and Yoko Ono’s bed-in and managed to walk around all night attached to a bed or the guy covered in leaves who came as Arthur Russell (Rustle, geddit?).

What’s the most memorable thing either Jonnie or yourself have gone as for Espookio?

I went as Divine one year. There is a photo that floats around the internet and every so often I will get an invite to DJ somewhere an they ask if I’ll come and do my drag act! Last year Jonnie came as Jade Goody undergoing chemotherapy. I still have the occasional nightmare about it.