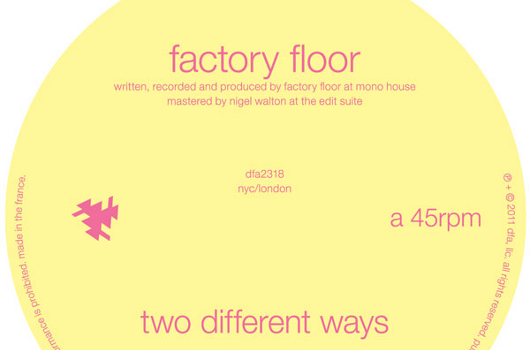 Exciting news from the DFA camp arrives with Factory Floor completing work on Two Different Ways, a debut twelve inch for the New York imprint which is set for release next month.

Despite having only a handful of releases to their name, Factory Floor have gained plaudits over the years for their industrially charged take on electronic pop music which gathers strands of influence from forebearers such as Joy Division and Throbbing Gristle and melds them with their own canny sonic alchemy. This has resulted in immense, droning anthems such as “Lying” and “R E A L L O V E”, both of which sound particularly devastating when performed live.

The latter was released earlier this year to great fanfare on the Optimo Music imprint, and the band’s arrival on DFA comes after months of whispers. As titles go, Two Different Ways proves to be quite apt as the band have delivered two variations on the same track, with the original version utilising more of vocalist Nik Void’s distinct haunting refrain. The flipside “Second Way” version drops a cursory nod to New Order and opts for the fully fledged electronic pop moment, with Void’s voice descending into the ether and becoming a part of the track itself.