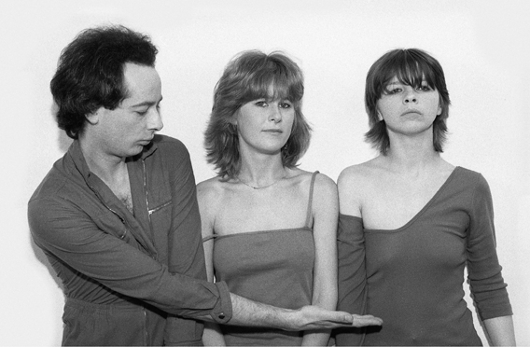 Pas de Deux was formed in 1982 by Walter Verdin, Hilde van Roy and Dett Peyskens, and the band released two LPs as well as a string of singles. “Rendez vous”, the aforementioned entrance into the perennial guilty pleasure that is the Eurovision Song Contest (viewable here) doesn’t necessarily demonstrate the band’s musical strengths, which are described by the Minimal Wave press release as a heady combination of post-punk and new wave mixed with a vocal style reminiscent of late 70s indie girl groups.

The band have already graced Veronica Vassicka’s label, with the title track from their 1983 flexi disc single Cardiocleptomanie featuring on the Hidden Tapes compilation released earlier this year. “Cardiocleptomanie” also features on the forthcoming eleven-track retrospective of the same name, which collects the best of the band’s newly remastered studio recordings and presents them in typically resplendent form.

The usual 999 hand numbered copies will be available on heavyweight 180 gram blue vinyl which is housed in a printed inner jacket and spot color printed outer jacket with band photo and song credits, as modelled below.

A1. Mani Meme
A2. Take A Cigarette
A3. Lonely Guys
A4. Rendez-Vous
A5. Lits Jumeaux
B1. Little Danny
B2. Iedereen Is Zot
B3. A Million Miles
B4. Rendez-Vous (Alt.)
B5. Cardiocleptomanie
B6. Squeezing