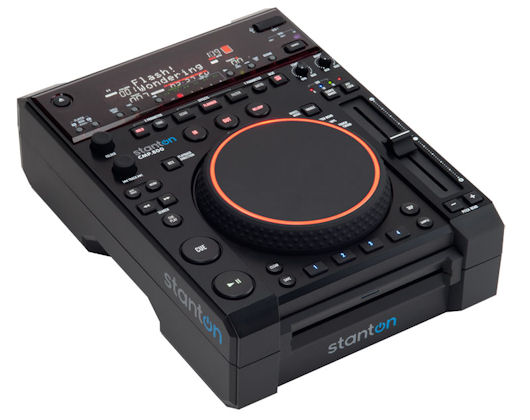 Kicking into the market at a competitive £399, the Stanton CMP 800 multi-format player has the look of a contemporary CD deck with the added bonus of being MIDI compatible, meaning that Serato and Traktor users can plug straight into an existing set-up without disrupting the DJ booth.

Being armed with a top loading standard TYPE A USB connection – with a further identical port at the rear of the unit – means that multiple drive sources can be used with the ability to transfer files between players. Out of the box it’s similar in size to Pioneer’s CDJ-350 model and logically laid out, with the pleasing inclusion of many features usually residing on top price-range models. An initial inspection reveals that despite first impressions of it feeling a little hollow and “plasticy”, it is actually well constructed, with the top panel being reassuringly robust. It sits nice and flush on our bench with no wobble, gripping well despite our heavy-handed testing policy. Connection wise, there’s an RCA stereo pair taking care of the audio output, with a S/PDIFF RCA out for the digital signal path. There’s 1/4” TRS for the headphone jack with independent rotary level control, plus the previously mentioned USB A connection and USB B port for MIDI. A 3.5mm relay port and figure 8 power insert make up the connection capabilities (see below).

Powering up is quick – with the usual polite welcome message – so let’s work our way down the CMP’s features. Starting at the top, you’re graced with a 21 x 6 cm black translucent perspex plate which houses the 12 x 4 cm LCD screen containing numerical and status display for up to 18 functions (more on these shortly). Around the screen, from right to left, is the second of the two USBs, with convenient rubber protective membrane – to avoid spilled drinks, presumably. This sits above the input source selector button which toggles between the two USB inputs, CD and – when depressed for a couple of seconds – MIDI mode. There’s a shift key, as many of the buttons have a second function, plus loop set for adjusting loop lengths and effects sync functions, which have corresponding LEDs to indicate their status. The adjacent time button breaks time into either total, elapsed and remaining, so you shouldn’t have any issues with tracks running out. Then there’s a single/cont key, which relates to playlist characteristics or the slightly outdated relay mode. There are also deck selectors for left/right when using MIDI mode.

“The CMP 800 is much quicker at reading the USB devices than some of the market alternatives, and toggling between the media sources is very snappy”

Moving downwards, the effects section has trigger buttons for echo, flanger and filter, which can be used in combinations of two and synced in time. These sound pretty convincing – they are modelled on the M.207 mixer – and would easily hold their ground against the Itch and Traktor native effects. The parameters on-screen are represented with the standard X and Y, although we’d guess that for echo it’s a standard wet/dry and time, while flanger will be phase cancellation for the Y and filter will act like a supercharged EQ with resonance. You can jam with these using either the jog wheel, pitch control or bend keys in various capacities. You can also tailor your own presets with the aid of the hold key (which conveniently glows when activated) for future recall.  Moving down the case there are those all-important loop in/out functions, with a handy reloop facility if your start and end points are a bit shaky.

Directly below, we have the 12cm diameter multi-functional jog wheel which looks and feels the business due to the rock solid mounting, non-slip rubber wall and illuminating light ring status-display. You can set it up to control the pitch (+/- 100), act like a vinyl platter (touching the top for scratch cueing and searching or nudging the side wall for more precise adjustments to the mix), two different types of rewind (normal and frame search) and the previously mentioned effects control. In the settings menu, the sensitivity can be calibrated to suit your mood/mixing style.  The light ring is cool and has eight modes, some of which are useful and informative; showing the playing point’s position or opposite position, illuminating constantly at varying levels of brightness or simply lighting up when touched to the more gimmicky flashing in time with the output level (we would have preferred a track ending alert as with the Pioneers – although no real issues here.) 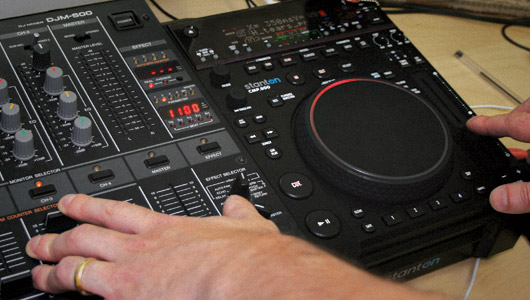 The far bottom axis of the player houses the four bank buttons which can be used independently as a cue point markers or trigger devices for the adjacent sampler, which permits five second samples onto each. Impressively, it’s possible to store up to 2000 cue points on 500 tracks on CD and a limitless four cue point per track on the USB devices. These can be saved into the system memory and recalled, even if the media source has been removed, and then reloaded at a later time. Up the left side of the player is the 12cm, zero- indented technics style pitch control, which has a rubberized slider and can be set at pitch percentage denominations of 6, 10,16 and 100 per cent, and can be deactivated to avoid knocking it on route to another control. Its movement is free-flowing and, try as we may, we couldn’t pull the slider-cap away from the metalwork. It’s equipped with plus and minus pitch bend keys for smooth adjustments, plus there’s a key lock facility so your vocals don’t sound like they’ve been on the helium gas.

Moving to the other side of the unit, there are transport functions, namely play/pause, cue and cue play, which instantly returns you to the cue point. The track search cursers are good for quick back and forth searches, with the track knob a particularly useful tool. There is a step encoder which can click through through your playlist one track at a time (by depressing you can do a rapid fire 10-tracks-per-click search or flick through ID3 information on the screen). You can get even deeper into your media files with the folder knob. Other noteworthy features include near instantaneous reverse playback, plus adjustable start and brake, which can both be set between 0 -10 seconds. We recommend downloading the Media Wallet software from the Stanton website, which, although far from essential, is a convenient way of organizing your files. Customizing the way the CMP-800 handles is straight-forward enough, the menu button allows you to tailor the system functions to your needs. 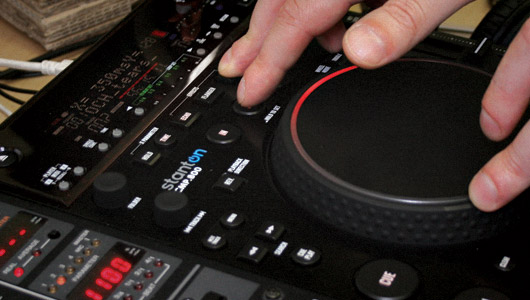 So, what’s the verdict? Firstly it’s a lot quicker at reading the USB devices than some of the market alternatives, and toggling between the media sources is very snappy. We didn’t experience any instances of the system getting stuck reading the file or crashing after excessive looping and effects maneuvers, not to mention the fact that the motor is very quiet. The whole experience feels more solid and mature than the C.324, and precise mixing is seemingly effortless – this can only be a good thing. We left the unit playing for 72 hours and the only thing we noticed was that the screen area plus connected USB sticks did get very hot to the touch, although performance-wise it still appeared to be fine. As it’s quite a fresh unit there doesn’t seem to be a commercially available .TSI file for Traktor, but we can confirm that it’s relatively simple to map in the controller manager section. [Find out more at Juno]