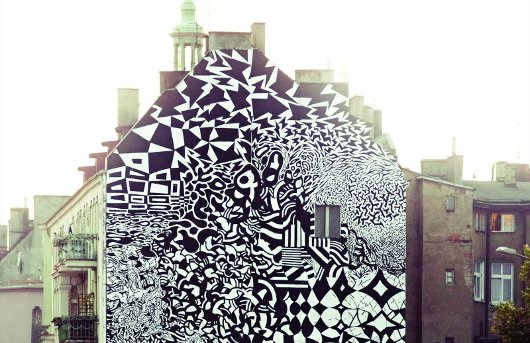 Martyn will celebrate the launch of his upcoming album Ghost People with the first in a series of worldwide events  in London next month.

With one off parties planned in Berlin, Los Angeles and more later this year, the central element to all the events will be a collaborative music and art performance between Martyn and 3024’s design guru Erosie. These special live sets are an extension of the artist concept behind Ghost People which features the above image of a mural from Erosie’s Horror Vacui or “fear of empty spaces”) series, painted 18m high in Poland.

To bring Ghost People to life, the duo will be combining their mediums with Martyn perfroming live to a backdrop of Erosie’s art, integrating the music from Ghost People and Erosie s art – keeping in line with the Horror Vacui mural style and ideology- and adapting it to each location.

Taking place in the now standard Hoxton area secret location, the inaugural event sees Flying Lotus’ label Brainfeeder team up with arch London promotion team Black Atlantic . There is some formidable DJ support in the shape of Exit boss dBridge,  Hyperdub‘s head honcho Kode9, who will reportedly be playing a special garage set on the night, and Citinite’s Manny Z. The evenings proceedings will be overseen by SP:MC.

Black Atlantic have a proven history of gathering interesting producers and artists together for unique visual installations and live performances in one-off locations. If Ghost People proves to be anywhere as near as good as the recent single Masks, a throbbing slice of 4/4 techno inflected garage-house, then this live show should be worth the Friday morning hangover.

Tickets cost £12, and are available here