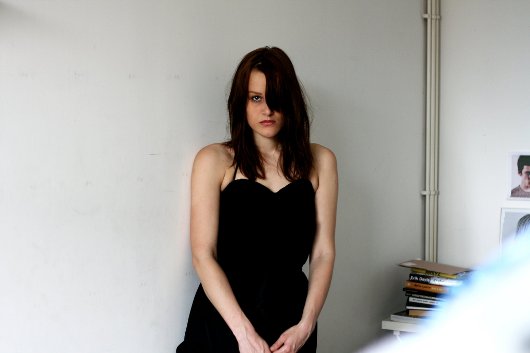 Framed by an arch and surrounded by flashing blue fairy lights in an East End pub’s back room would generally be considered an odd way to see anyone perform, but somehow, in the case of Not Not Fun and 100% Silk artist Maria Minerva’s recent gig at Dalston’s Shacklewell Arms, the whole thing seemed totally appropriate.

Maria Minerva (real name Maria Juur) has been making quite a name for herself over the past six months with her smudged out approach to bedroom pop music, with releases on Not Not Fun, and the label’s sister imprint, the more dancefloor focused 100% Silk, and this gig represented her UK live debut. Her music is not the most obvious to lend itself to a live setting; on record her muddy, lo-fi productions, whether consciously or not, often push outside of comfortable sound ranges as compression and clipping seep into the edges of the mix. On record, her fragile vocals occasionally sound thin – of course the debate over whether higher production values would ruin the appeal of her music is one that could run endlessly, but in a live context she managed to maintain her unique charm whilst her sound was undeniably given more depth by a decent soundsystem. Beginning her set with a number of her hazier disco influenced tracks, coming out of the speakers in dusty neon tones, it became obvious that Minerva is no diva; rather she chose to set herself behind a table with laptop and small MIDI keyboard, maintaining a fairly retiring pose throughout. There’s usually nothing as dull as watching a producer hunched over a laptop, but somehow Minerva’s stage presence managed to enthrall the crowd throughout, primarily through the blissful vocal waves that drifted from her microphone. The whole thing had the intimate feel of a gig in someone’s front room, somehow maintaining an air of mystique while warmly inviting the crowd in to her performance.

“Although her music is ostensibly the kind of lo-fi avant-pop in the vein of many of Not Not Fun’s roster, and shares qualities with the smoky 80s influenced pop of Nite Jewel, her music has an equally arcane quality which has more in common with synth revivalists such as Laurel Halo and Oneohtrix Point Never”

Although her music is ostensibly the kind of lo-fi avant-pop in the vein of many of Not Not Fun’s roster, and shares qualities with the smoky 80s influenced pop of Nite Jewel, her music has an equally arcane quality which has more in common with synth revivalists such as Laurel Halo and Oneohtrix Point Never. This was particularly evident on one of her next tracks, featuring a rippling synth conga line which really popped out of the speakers and audibly floated over the heads of the audience, whilst her eerie delayed vocals weaved their way through the gaps. It proved that she has a real ability to create density within her productions, something that Oneohtrix Point Never is particularly adept with, and the fact that she was able to create a similar effect to his remarkably dense productions without the benefit of extensive analogue gear is high praise.

The last third of the performance saw her ramp up the energy considerably, taking the music out of the hazy pop sphere, and into the more decidedly dancefloor focused. As she launched into a storm of drum machine beats and handclaps which fired through the soundsystem, the sense of surprise in the audience was obvious. Although for the most part the live focus was on her more laid back jams, this shift showed just how talented an ear she has for more powerful beat driven productions, with one track in particular coming across like the dark, brooding organic appropriation of Chicago jack that Legowelt has such mastery over. This track was undoubtedly a high point of the set; although Minerva probably wouldn’t consider herself a house producer per se, this had all the power coming out of a large soundsystem to suggest that such a move wouldn’t be entirely out of the question. Had this been the basement of Plastic People on a Friday night it’s easy to imagine a crowd going crazy to it, but shamefully the relatively sedate Monday crowd seemed rather reluctant to get quite so involved. The following track was just as surprising. Continuing with the drum machine theme, it saw a more hip-hop tempo and handclap pattern, while a ghetto vocal sample drifted in the background in response to her own heavily delayed voice. The effect was startling; with the low-end that accompanied it, along with the dubbed out kosmische synth chords that drifted over right in the mid-range, it was possible to hear echoes of the skewed transmissions of Hype Williams, albeit with a more disco leaning vocal, further demonstrating her ability to bend genres whilst maintaining a coherent palette of sound.

“The last third of the performance saw her ramp up the energy considerably, taking the music out of the hazy pop sphere, and into the more decidedly dancefloor focused”

I went to the gig expecting Minerva to be a postmodern, self-aware performer in the vein of Glass Candy’s Ida No, but what we got was actually much more enlightening; it was the obvious tentative beginnings of an artist who has the potential, like Ariel Pink, to move beyond the bedroom aesthetic into something with much wider appeal, most speciafically within the realm of dance music. The majority of the set was played seamlessly from her laptop, and it was obvious, whether the crowd were dancing or not, that there was a conscious DJ approach to her performance. Given her abstract approach to pop, which is concerned as much with texture as it is with melody, it’s something that suits her music particularly well.