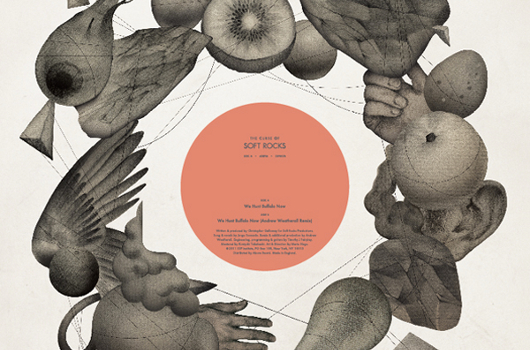 Exciting news arrives from ESP Institute HQ with the revelation that Soft Rocks will be releasing a long overdue debut album on the label later this year, craftily entitled The Curse Of Soft Rocks.

After years of countless excellent edits, mix CDs and remixes across far too many labels to mention, the quartet have finally decided to put their collective studio knowledge to more original endeavours. Supposedly a riposte to the current climate where “any laptop-savvy poseur can upload their bland nu-disco or faux-Chi-house directly to the cesspool of digitally downloadable fodder”, without even hearing the Soft Rocks album, it already delivers on the acerbic press release front.

A taste of what to expect ahead of the album comes in the shape of We Hunt Buffalo Now, which the sharper pencils amongst you might have heard on Soft Rocks most recent visit to the Beats In Space studio. The track features the vocal talents of San Francisco post-punk hero Jorge Socarras (of Indoor Life fame) amidst a skewed, punked out dub rhythm worthy of Mr Lee Scratch Perry. On hand to remix the track is Sir Andy Weatherall, with a gritty stomping glam goth disco effort every bit as collosal as his recent revision of Toddla T.

ESP Institute will release We Hunt Buffalo Now by Soft Rocks on 12″ on September 19 with the album to follow soon after.